Love is in the air. Cupid has plucked his bow and taken aim at the luckier of us and with St. Valentine’s Day driving its annual wedge between the loved-up individuals that get into the swing of the event and those that are sick of the sight of anything even vaguely heart-shaped, it seems perfectly apt that Kitty Powers’ Matchmaker has fluttered its way to consoles. 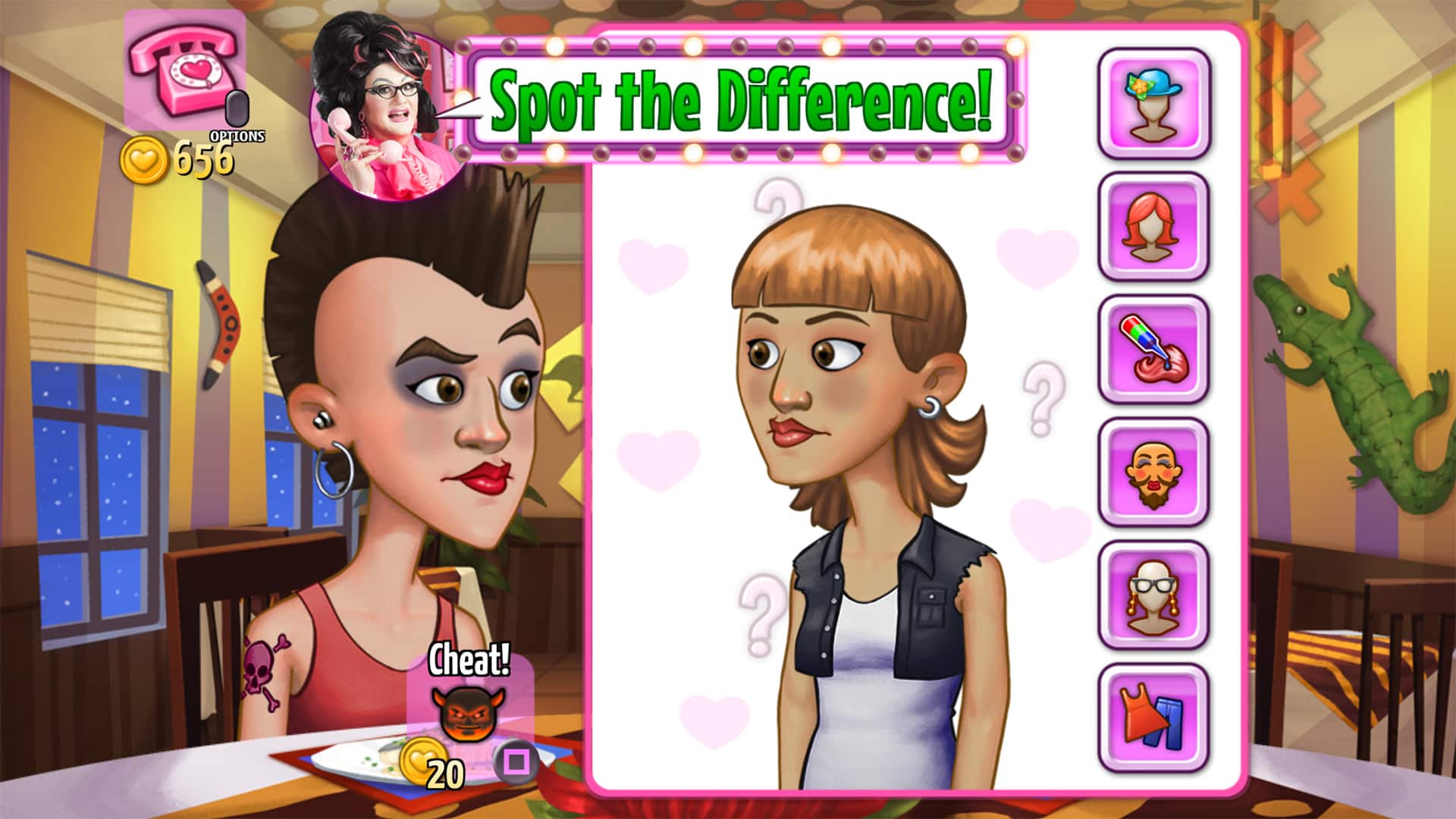 It’s been something of a long road, with the game initially launching for mobile devices back in September of 2014, on Steam in April of 2015, and finally on consoles now, almost two years later. As the title would suggest, British drag star Kitty Powers serves as your guide as you attempt to build the best dating service in town. To do this, you need to match clients up with potential partners from Kitty’s black book, taking into account their compatibility, style, and preferences. That’s just for starters, of course, since your client then gets fitted with an earpiece so that you can tell them what to do once they’re out on their date.

The “date night” section of play is the main meat of the game, allowing you to tell your client what to discuss, when to lie, when to tell the truth, and to also take part in micro-games that will ultimately determine whether they’ll be going home alone to cry in front of the TV, or ending the night supping champagne in a hot tub with their new beau. Like you do. A decent chunk of the gameplay here is memory-based. If your date nips to the bathroom for example, something about their appearance will have changed when they come back. If you can’t tell that they went in with a short bob and came out with a ponytail, they’ll take offence and be less likely to want to take things further. The same goes for your conversational abilities. If you ask them about their interests (which are displayed to you before the date begins) and say “So, I hear you’re into rock climbing?” when they’re a bookish type that wouldn’t be seen dead with a set of crampons, you’ll probably end up striking out there, as well. 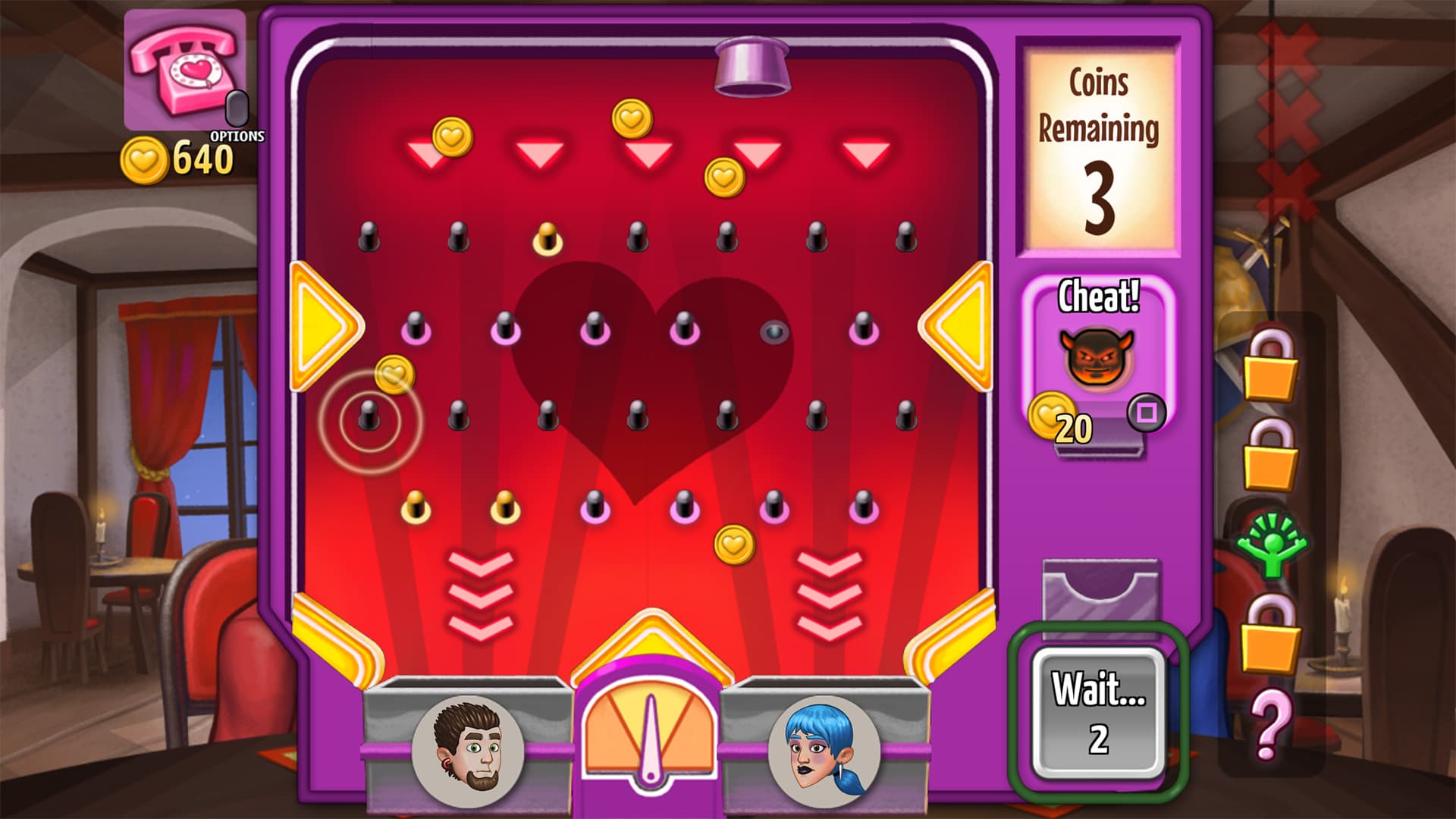 Indeed, there are a fair amount of challenges to take on during each particular date. At certain points – when you’ve earned enough coins to unlock a new date location, usually – new tasks will be thrown into the mix that liven things up, but even though there is variation to be had, it doesn’t take long before all of the encounters start to feel somewhat familiar. That isn’t to say that there isn’t fun to be had. After all, it’s hard not to raise a smile when you have to bust out a deck of cards to play a risky game of hi-lo to see if your client can hold in the downtown pushdown that could cause them to break wind and…erm…ruin the atmosphere. If you do fail and let one slip out, you can always lie, blame it on the waiter, then spin the “Wheel of Misfortune” to see if your date believes you or not. This is far from the only way that things can go horribly awry, and the varying ways that you’ll fail to match your couples up will cause for some Carry On-style guffaws to break out, that’s for sure.

In between dates, you can – if you have the in-game funds – unlock new style options that allows you to doll your client up a bit before they meet their date. Also, you can purchase new pages from Kitty’s book to widen your potential dating pool. But even with the comedy on offer, it’s still tough to get around the fact that there doesn’t appear to be a satisfying endgame to proceedings. You start at a rundown agency and try to build it up by matching couple after couple after couple. When you reach a certain level, you get a stamp on your ID card and then start again at a new agency and do the same thing. The only thing you’re ever really aiming for in the long-term, is to rack up successful matches so that you best your friends (there doesn’t appear to be a global leaderboard, strangely) and to collect some very poorly thought-out trophies that don’t really add anything to proceedings. 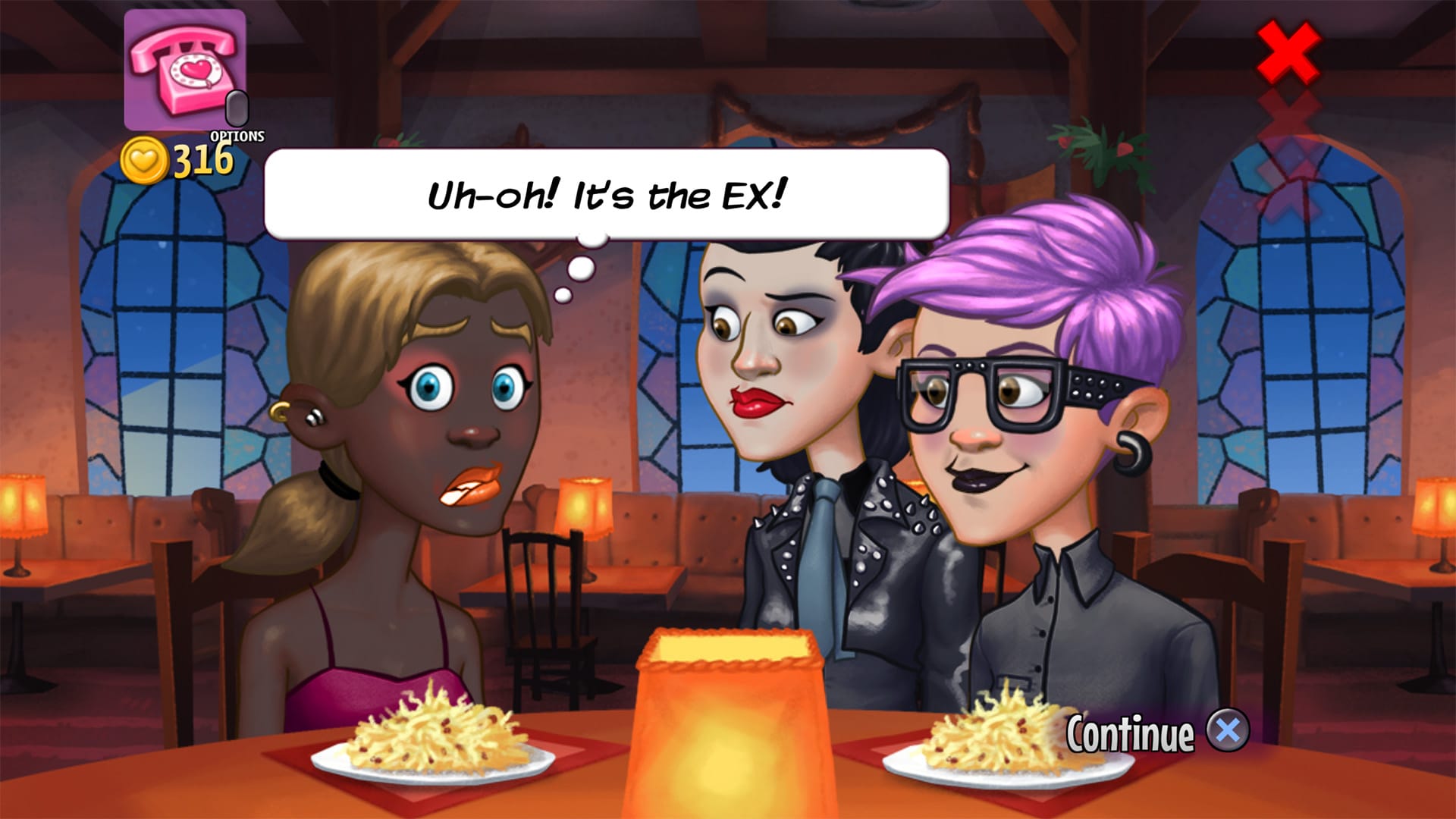 This lack of any real goal means that – as with a lot of mobile-to-console ports – while Kitty Powers’ Matchmaker is truly entertaining for a short while, it’s not really something that will occupy hours of your time in one sitting. On a portable device, you could play through a few dates, then be done with it until the next time you had a few minutes to spare. On console, it’s a very different feeling, especially when you’re being asked for three times the price of the essentially identical mobile version from two years ago.