Little Nightmares takes players into what feels like a nightmarish atmosphere with no idea of what’s going on. In fact, the platforming/adventure game doesn’t provide any type of dialog or direction other than telling players how to correctly use the controls. During my demo, I appear to be in the basement of a much larger home. It’s dark, intimidating, and probably the perfect setting for a little nightmare.

Players control a young child named Six who must navigate the level in front of her to progress onward. To what end? Who knows. But for players, they are overcome with an urgency to escape the circumstance in which they are in, so Six can be free of the frightening surroundings. As mentioned, there are no indicators telling players what’s going on or what move they need to make next. It’s all exploration and unlocking the secrets with their wits.

I found myself climbing up shelves to advance into the next room through an air duct. I also encountered a not so friendly looking chef who I had to sneak by, otherwise he would chase Six down and capture her, which restarts the area. As I got used to the controls I realized I had to be very patient around the chef, as on multiple occasions he saw me or heard me quickly walking by. This created some tense situations because the chef is faster than Six. However, thankfully, at one point I was able to get around a corner and literally slide underneath a shelf and hide just before the Chef could capture me. That was an incredibly anxious and scary moment, but it also felt pretty good and looked stylish to be able to escape like that. 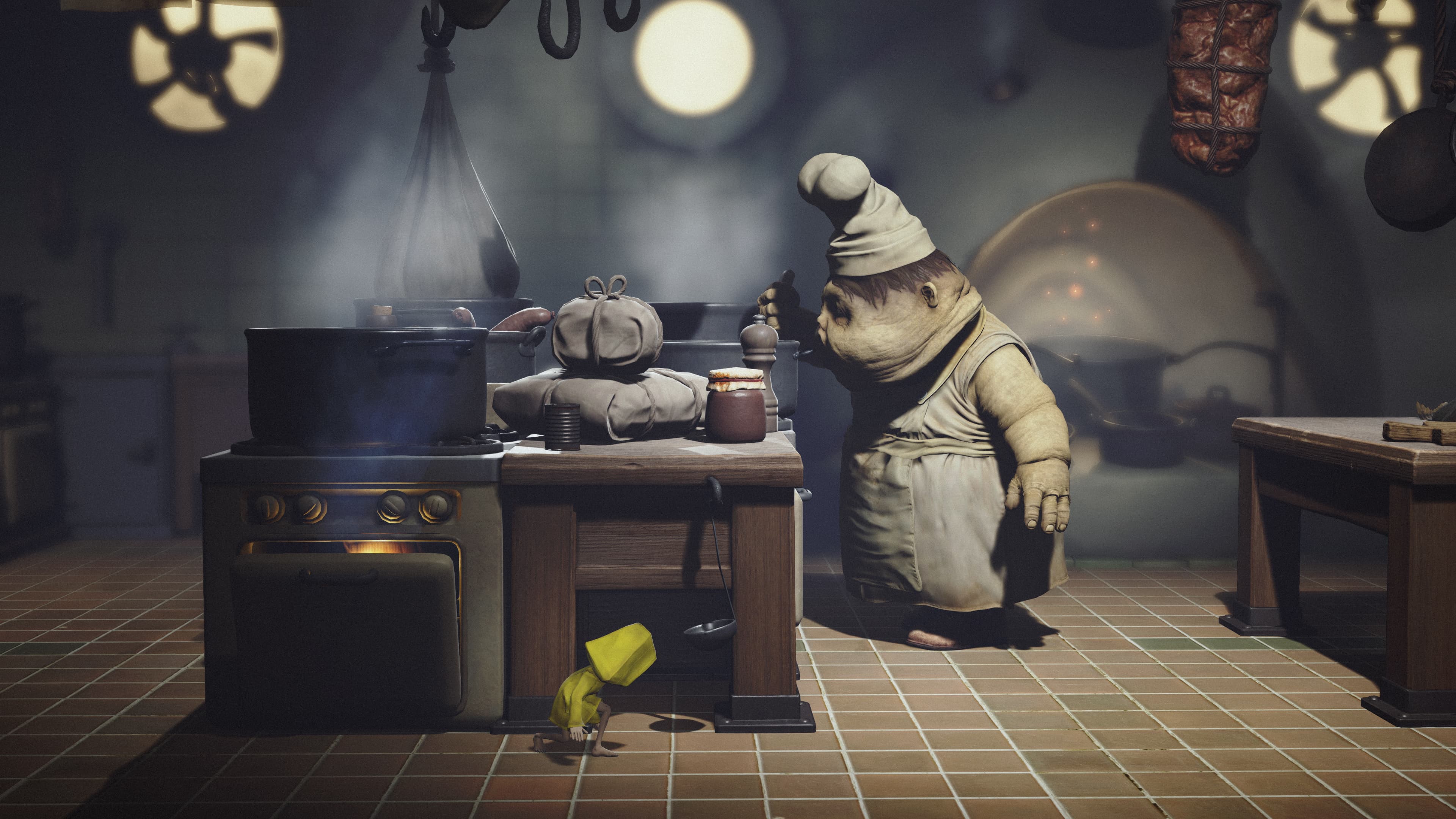 Once I progressed past the Chef I encountered a room where I could take an elevator to the floor above. I had no idea what to do in this room except thoroughly evaluate the situation and take note of what stood out. There was some type of hatch on the floor with a piece of meat next to it. It looked as if the hatch would open if any amount of weight was applied to it, so I placed the piece of meat on it. But nothing happened. I ended up finding two additional pieces of meat and placed both on the same spot. Again, nothing happened. I gave up and went back downstairs to find a switch that actually ended up opening this hatch. This caused the meat to fall through and into a machine that creates sausage links. I then used those links to swing into the next section.

It was a surprise to me that I had actually solved the puzzle by placing that meat on the hatch. I just randomly did what looked to make sense. Then when I went back to the room below I was pleasantly surprised to find that I had solved the puzzle correctly on the first try. That was fun, of course, and it made me further appreciate the game.

I had two very awesome moments in the Little Nightmares demo. Sliding into the open section underneath the shelf with Six to escape the Chef and solving that puzzle on the first try without even realizing it. This brief run through the game was encouraging and helped generate my excitement for it.

As I moved and fell into the final room in the demo, it reminded me of the garbage chute in the original Star Wars. I was swimming around with no obvious exit and that’s when the game took over and showed something swimming in the water! It was underneath all the debris scattered on top of the water, moving directly toward Six…..Yikes! And that’s where the demo ended.

Oh, my gosh! Seriously? I think we all had little nightmares about that scene in Star Wars. And now it comes back to us again in this game. But what happens to Six?? I guess I’ll just have to wait until the game releases.

What a great demo for Little Nightmares. I really enjoyed my time demoing it and very much look forward to experiencing more of the same when it releases on PlayStation 4, Xbox One, and PC on April 28th, 2017.