Think about the amount of times that some high-ranking government official has made an unpopular decision about how your city (or country) is run. Every time, the same thing happens. Around the watercooler and on social media, we’re all so certain that we could have done a better job and that we have all the answers. It can’t be that difficult to run a city, huh? 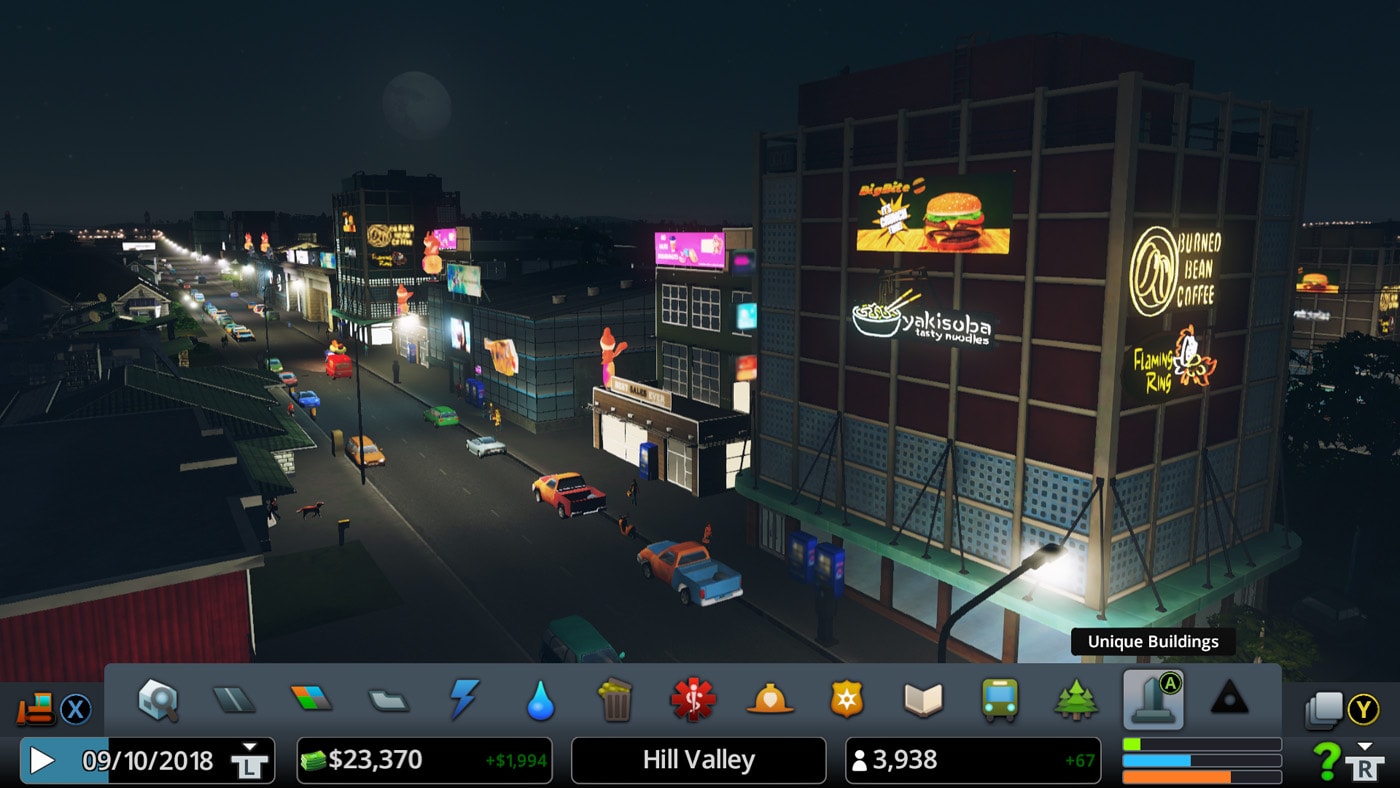 Well, with the Xbox One port of the popular city management sim Cities: Skylines, you’ll be able to work out if your simple solutions were correct. I guarantee that more than likely, they weren’t. While the game starts off slow – you have an empty plot of land and a bunch of money to build things that will attract people to your new town, then you wait for them to move in – it quickly becomes a delicate plate-spinning act where you have to think several moves ahead. For example, if the demand for housing outstrips your supply, you can easily build a road to an undeveloped area of the map, throw in some sewer pipes and electrical lines, and mark the new location as being specifically for residential use. Easy.

Well, not so much. The new residents might use enough electricity to tip your power grid over its maximum limit, or use more water than your pumping station is able to provide. Entire families might move in, meaning that your schools and hospitals become overcrowded. The extra trash they generate could be too much for your refuse collectors or your landfill site. Maybe the free-flowing traffic on the roads around the new properties could suddenly grind to a gridlocked halt due to the extra vehicles now in play. If that happens and an ore truck can’t get through to provide your coal-driven power station with fuel, the whole city will suffer blackouts. Worse still, if your lovely new bus depot catches fire and your brave firemen can’t get their truck through the traffic to extinguish it, you can wave goodbye to your entire bus service and watch as the happiness level of your citizens plummets due to them having to wear out their shoe leather to get anywhere. Also, where are the new folks going to spend their money? Where will they work? You’ll need to provide new commercial and industrial zones to account for those things, and on top of the same considerations you had to make for your new residential area, anything involving industry might generate smog or noise that lowers the quality of life for existing residents in the town. If that happens, they’ll move elsewhere and take their tax dollars with them. 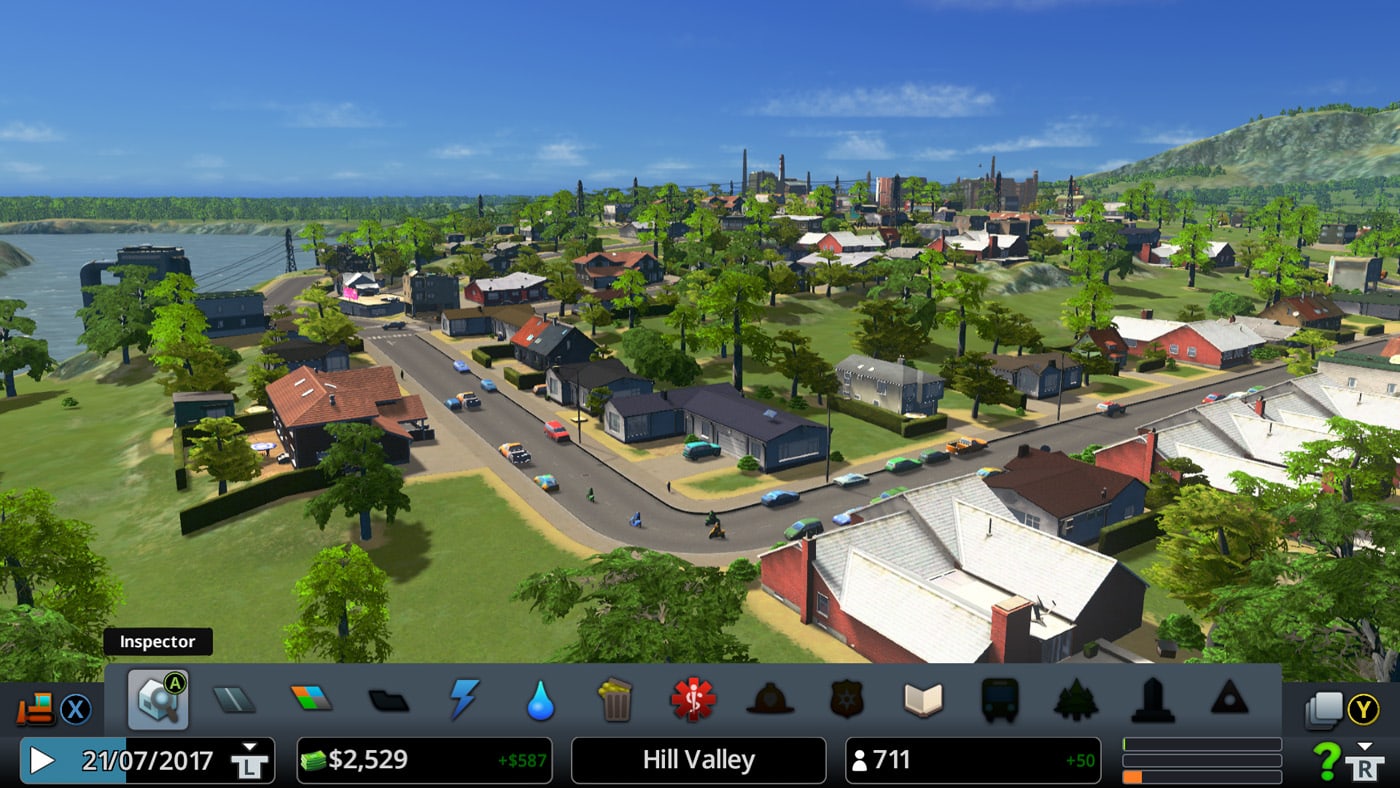 In Cities: Skylines, it’s safe to say that planning ahead is absolutely key, even when you’re laying down the groundwork for your new metropolis on an empty map.

With all of these things to consider, being able to navigate around the game’s interface easily is an absolute must and for most people, will be one of their main concerns. Fortunately, the transition from mouse and keyboard to controller has been carried out with what appears to be great consideration and everything works very, very nicely in this area. Once you’ve breezed through the tutorial steps and built up a small village the control system becomes second nature and that’s to the developer’s great credit, especially when you consider exactly how deep you can dive into the reams of information that’s available. Using the Inspector tool, you can point at any building in the city and get a rundown of what’s going on. You can even rename individual houses and businesses, if that’s what you want to do.

Outside of the actual nuts and bolts of constructing the city, there’s delicately-balanced financial management to be done in order to drive your income and expenses. If you’re running short of funds, you can adjust the budgets for your city’s various services, or alter the taxation rates for specific types of property. Then again, maybe instigating a city-wide metered electricity policy could cost less in the long run than trying to trim the budget so that you can afford to build a new power plant? 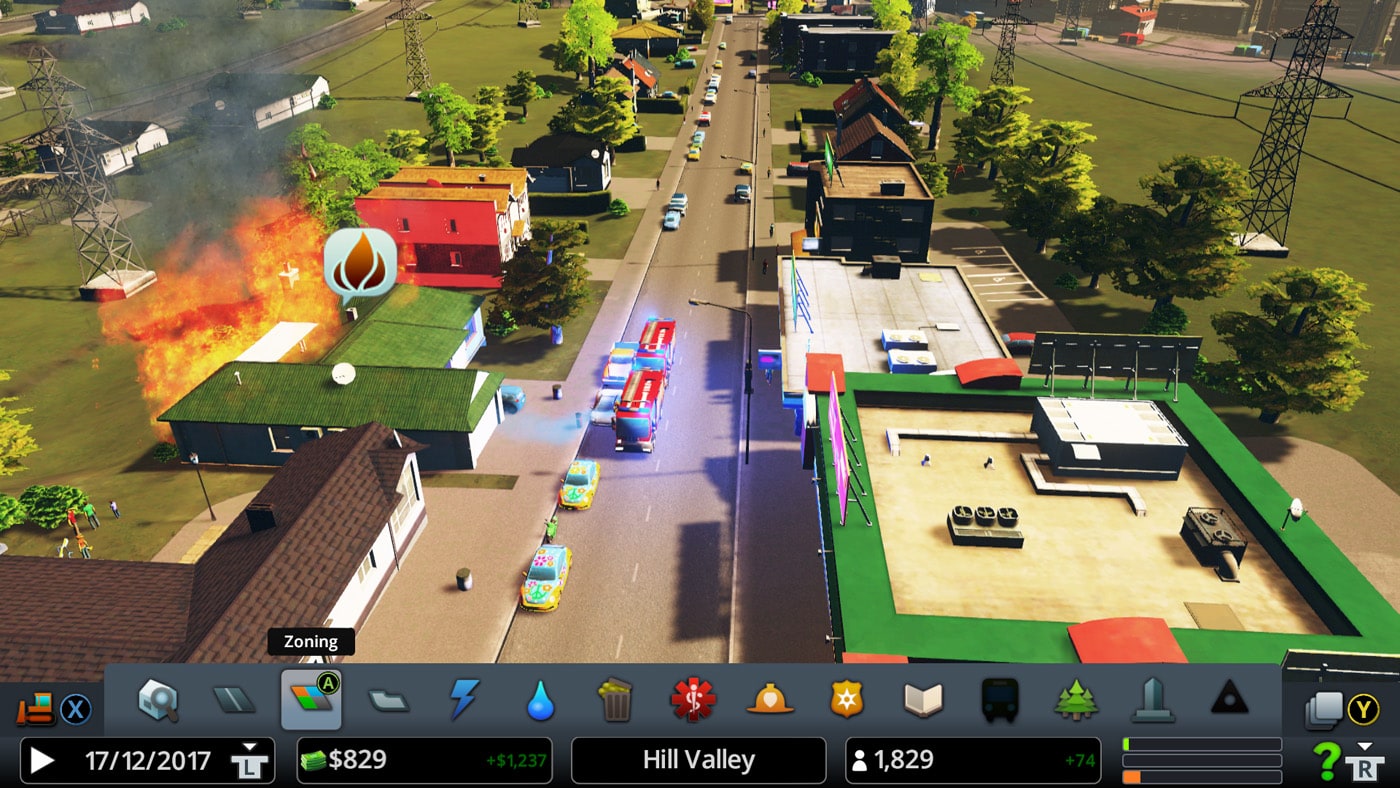 Make no mistake, for all of Cities: Skylines approachability and ease of use, there’s a deep, deep simulation here and it’s one that is incredibly addictive.

There are some minor framerate issues that come into play when your city gets past a certain point, size-wise, but they aren’t really anything to write home about. In fact, the only real concern with the final product is that while the actual gameplay itself is stellar, there aren’t really that many ways to get involved with it. You can enable unlimited funds from the beginning of the game (which understandably prevents achievements from firing) if you just want to go crazy, and you can select the terrain type that you’d like to build your city on, but that’s about it. There are no leaderboards or multiplayer play included. There are also no challenge modes to be found – which you’d expect to be a given in a game like this – and some of the more interesting DLC packs that are available for the PC version of the game are not included or even available to purchase. So, there are no natural disasters to be found (which were one of the more fun parts of the legendary Sim City series), there’s no snowfall to contend with, no sporting stadiums, and no high-tech, Chinese, or Art Deco-style buildings. The “Mass Transit” DLC launches for PC in a few weeks and looks like it could be a great addition to the game. As with the existing DLC packs though, it isn’t clear as to whether or not it’ll make the jump to Xbox One at any point.

Cities: Skylines gives you a plot of land and a small amount of in-game money, and tasks you with building something great. Continuing to grow your empire until you get bored is about the only way to play and the bare-bones feel of the selection of game modes stands in stark contrast to the huge level of detail provided in the game itself. Fortunately, that one mode proves to be addictive enough that boredom is usually the absolute thing on your mind.

Cities: Skylines Xbox One Edition Review: Moving on Up