by Stormin Skies
in Entertainment, Gaming 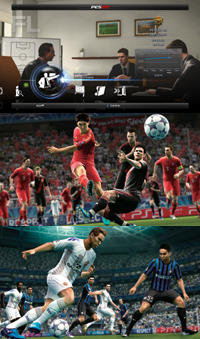 PES 2012 is champions league football! Well soccer I should say, but it just sounds better the other way.

Now when it comes to the gameplay, the handling of Pro Evolution Soccer 2012 is still not as smooth as I would prefer it to be when playing a match. It comes off feeling a little jumpy or awkward even though it still has great elements to it’s gameplay. This includes some great shooting techniques that turn into some very nice and seemingly realistic goals. That’s where the game has a good feel for soccer when you are taking shots or in goal scoring opportunities and creating chances. It feels really good in that aspect as well as the passing at times. However, some of the passes still come off as odd and sometimes you might ask “why did that defender not adjust to that”. So you may get to the point of raising many questions about the AI’s response to the gameplay.

Defending is another part of the gameplay that I seemingly often had a difficult time responding to, which was leading to fouls or mishaps where I allowed the attacking player to get past my defense. This was also due to auto-switching, so that was something that I needed to get use to. Even with the game not feeling the smoothest it still has plenty of good and fun gameplay with exciting moments as well as some good animations to go along with it. Even with the faults the gameplay still has it’s pluses and I still had a good time playing this title.

As for the other game modes outside of the Champions League you will have Football Life. This includes your master league and legends which are both always done very nicely and they also have great animations within the master league and legends mode that go along with your new adventure into Football Life. Both are still a lot of fun to play and will be the main modes outside of the Champions League. You also have your basic League and Cup modes as well though.

As we all know, Pro Evolution Soccer does not have all the real team names though they do have most of the player names. You can still edit a lot of details though and change the right team to the right name. So while Liverpool is not in the game for me to select, I can still easily edit the name into the game as well as edit the logo.

Visually the game looks pretty darn good also and I like most of the player animations. The soundtrack is also pretty enjoyable as well, and the commentators do a good job. I will also mention once again about PES 2012 having the official Champions League music to go along with the Champions League mode which once again is fantastically done.

This may not be the best soccer title out there, but by no means is it a bad one to own or to play as it still captures many good moments in the world of soccer that are worth experiencing. You will also have some good online play to go along with everything else there is to offer.