I’m pretty sure I fell in love with Donkey Kong Country: Tropical Freeze before it actually began. The opening presentation of the story looks stunning and captures the player’s attention ever so easily. It’s great to see this new “evil” sailing in from sea, bringing freezing conditions along with it. The character reactions are really pleasant to see and it gets players ready to begin their journey into this new Donkey Kong Country title.

Donkey Kong Country: Tropical Freeze returns players right back into the platforming gameplay that’s been so very familiar over the years. Right away, though, players find themselves loving the beautiful new visuals that the game offers as they make their way through each level. They’ll then stumble across shifting backgrounds that make the experience even more joyful as they feel the action that’s taking place around them. The game easily pulls the player in right from the beginning. 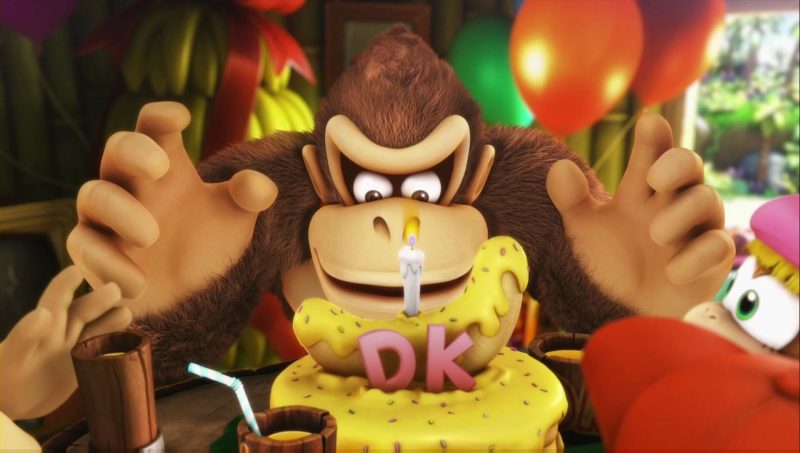 A lot of the levels are very nicely crafted, bringing lots of desire to the player as they navigate the various obstacles. A lot of the usual events return to the game with walls to climb, ropes to swing on, and rhinos and rail carts to ride. There is also underwater exploration that takes place in the game. From the deep sea below to the skies high above, players encounter many unique sceneries, all which are beautiful.

I’ve always been a big fan of the rail cart stages in the Donkey Kong Country games and it’s no different in this title. The first rail cart level that players experience is great for getting the player back in the groove of testing their reaction skills, and while the first rail cart level is easy, it still provides a lot of commotion that’s mighty fun to experience. The second rail cart level, and the second world itself, is when the difficulty of the game really begins to pick up.

The difficulty really chimes up the deeper one swings into the game. The first world really is quite the piece of cake, even though it’s nice to experience. Even the boss is fairly easy. The second world begins the real challenge. Jumps need to be timed a lot better, situations become more dire, and I continued saying that “I swear I pushed the jump button – grrr!!!”

The boss in the second level is also a treat to experience for the first time. Each boss has multiple phases, and this guy really lets players know that the easy gameplay is long gone. It’s time to go to school, folks! It’s only the little things that can catch a player off guard when dealing with each boss’s patters. Once a player see’s the entire arsenal of a boss is when it gets easier, but witnessing some of the moves for the first time can be painful. It makes the victory all the more worth it though!

I fell even more in love when I came across a few very unique levels with strong winds from tornadoes and fiery blazes that covered the entire level. I love the basic platforming gameplay that Tropical Freezes offers, but it’s even more enjoyable when situations change in a way that forces players to do things differently. There is a lot of gameplay variety in the game that keeps it exciting from start to finish and players will greatly appreciate that. 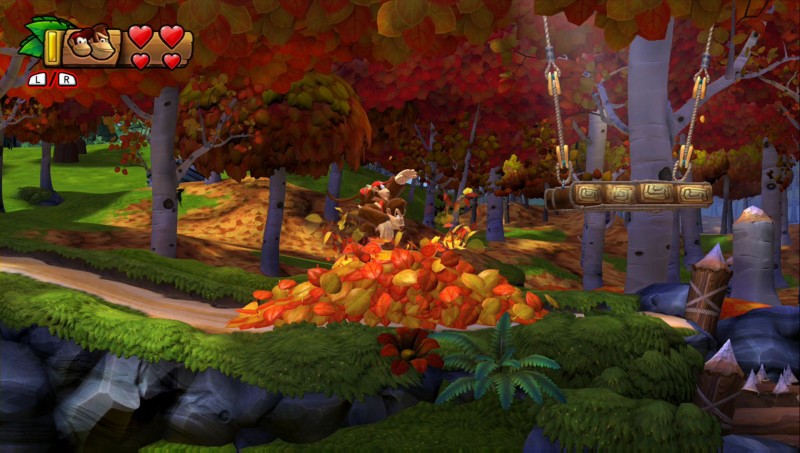 There are the usual items to find hidden throughout or in places that need careful and precise movements in order to reach them. Players can have an easy time reaching a lot of the letters to spell Kong in each level, but towards the end I feel a lot of people will just want to simply beat the level and worry about the letters another time. Same goes for the hidden rooms for finding the puzzles pieces.

There are levels that feel pretty basic, but it’s only a few compared to the many. Each level provides beautiful scenery, and some of the underwater levels look lovely as well. Donkey Kong Country: Tropical Freeze gives gamers and fans of the series exactly what they want which is a wonderfully crafted Donkey Kong experience on the Wii U.

There is plenty to keep playing for as well as gamers can play Time Attack mode on each level, challenging their friends for the top positions. This is, of course, after going back and collecting all the missing puzzles pieces. It’s also nice that players can hire a bird to find the hidden pieces when they seem too difficult to stumble across.

Donkey Kong Country: Tropical Freeze is easily another must own title for the Wii U.