I recently had the opportunity to stop by a local mall to check out the Play Nintendo Tour, an event that goes to multiple US cities during the summer and gives locals an opportunity to experience the Nintendo 3DS and some of its games.

The Play Nintendo Tour sets up shop in a mall for a weekend long event with a unique atmosphere that attracts both kids and adults. Interested gamers have a chance to visit a number of themed stations that are decorated based on the game. This allows gamers to play games like Donkey Kong Country Returns 3D while standing next to a DK barrel and sitting on a comfortable banana bean bag. Yoshi’s New World featured egg-shaped chairs that were actually quite comfortable to sit in. Mario Kart 7, of course, had racing chairs set up to get players in the mood for speeding through a course.

Attendees are given Nintendo passports that upon completing each of the seven games a Nintendo staffer will place a sticker on it. However, not only does the attendee have to play the game to collect a sticker, but they also have to answer a trivia question. Don’t worry though, the staff at the event are super friendly and give plenty of useful hints until the questions get answered. 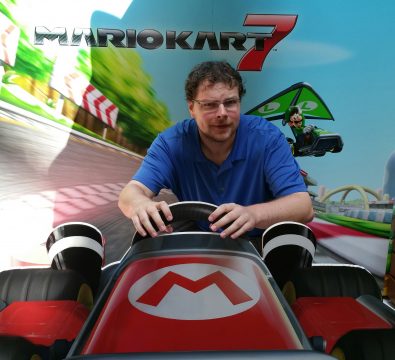 Once the passport is filled up with all seven stickers the attendee can then go to another area to collect a coin and attempt to win a prize out of a claw machine. Even if the person fails at grabbing a stuffed Nintendo item out of the machine, there are still collector’s pins that are given for participating.

The passport system works really well as it guides fans and, most importantly, potential fans along a path to trying 7 different 3DS games that they may have never experienced before. I personally haven’t played much of a Kirby game, but this opportunity gave me the chance to check out Kirby: Planet Robobot, and I unexpectedly fell in love with it during the short amount of time I had playing the title. This is exactly the type of experience that the Play Nintendo Tour sets out to create for those passing through. And as much fun as I saw others having, I can only imagine that there were plenty of those same experiences going around.

The Play Nintendo Tour doesn’t end after completing each game though. There’s one more opportunity for those who enjoy a more competitive experience. There is a four-player stage set up where attendees can play some of the games competitively. The first-place winner earns a prize, such as a stuffed miniature Luigi doll, while the other participants get a consolation prize – a pencil. The competition stage also has an announcer that makes it all the more fun to participate in, even for those who get a pencil – like me. I don’t want to talk about it…

Besides playing the games, one of the best parts about the entire setup is that it allows for plenty of great photo opportunities. I couldn’t help myself and had to get my picture taken at the Mario Kart stage. Mario and other Nintendo characters also walk around the event on specified days and give fans the chance to get their picture taken with them.

It’s easy to see the value of the Play Nintendo Tour as it gives families and casual gamers a chance to experience games in a very fun and friendly setting. If anyone ever has the opportunity to check it out I highly recommend grabbing a passport and going on tour with family and friends. It’s a nice way to spend a few hours.

Play Nintendo Tour: A Pleasant Venue for Family and Friends