I don’t know what it is about space, but it’s hands-down my favorite board game theme. I guess I’m just a sci-fi nut at heart. I also happen to be rather fond of space simulations/empire building titles like Master of Orion or Galactic Civilizations. Problem is, I’m not a huge fan of board games that take a super-long time to set up or complete. And as intriguing as I find a game like Eclipse, I just don’t know if I could sit through it. This is why I feel like Quantum is pretty much made for me (and up to four players like me).

Quantum offers simplified versions of many 4X elements – research, technological advancements, fleet movement, space battles, etc – and compresses the whole experience down to one 45 ~ 60 minute session. The box includes player empire/reference boards, map tiles containing planets with different values, lots and lots of large dice, Quantum Cubes, and two decks of cards. The game board itself is composed of multiple map tiles, which gives players a variety of layouts to play with as well as the option to customize their own systems; don’t worry, there’s also a guide for basic and advanced maps. The two sets of cards (Commands and Gambits) will have various instantaneous or permanent effects, while Quantum Cubes are instrumental in claiming planets and ultimately winning. The dice come in four sets of seven (blue, red, yellow, and green – one for each player) and represent your ships. There are also two extra dice (one black and one white) to be used during combat. 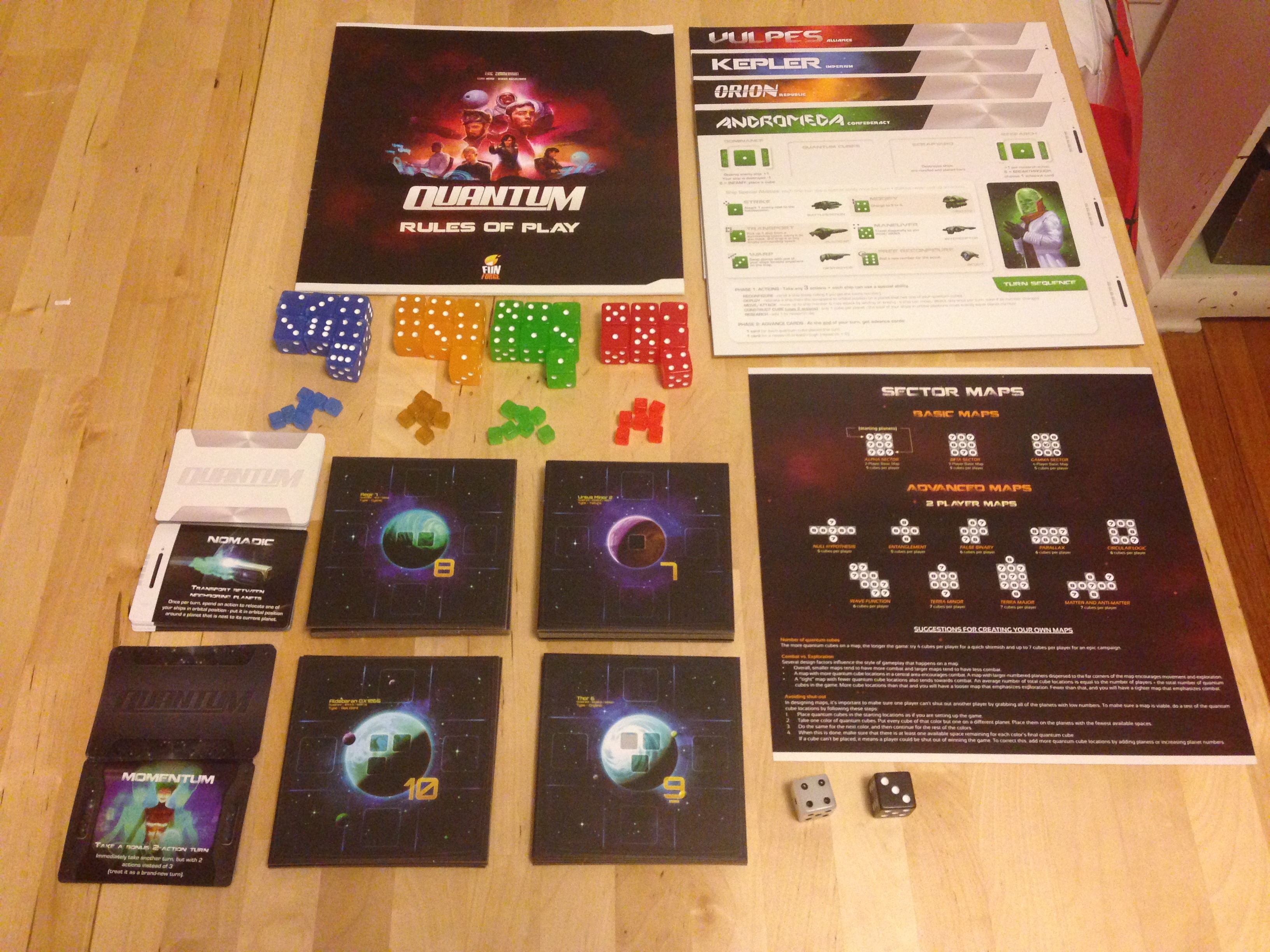 Setup involves laying out the map, choosing an empire to play as (they’re all mechanically the same), using two of your dice for Research and Dominance counters respectively, setting two more dice aside for possible fleet expansions, placing one of your allotted Quantum Cubes on your home planet, and finally rolling your last three dice to determine your staring fleet and placing them around said home planet. There are suggested maps you can use depending on the number of players, as well as advanced options if you’d like to try something a little different. Similarly, you may also experiment with your own layouts and the guide even offers suggestions on how you might set up a map to cater to different styles of play. The value of a tile’s planet determines how much cumulative value of your own ships is required to conquer it (so a planet with a value of “7” would need some combination of ships adding up to exactly seven). Keep this in mind when decided where you want to place your ships around your home planet. With a little foresight you could take your first neighboring planet on your first turn!

One turn in Quantum is comprised of three actions. Actions include things like moving a ship (and fighting if you’re within range and feel like it), ticking up your research counter, reconfiguring one of your ships if you’d prefer a different number, or deploying a ship from your Scrapyard that’s been previously destroyed. It’s also possible to place a Quantum Cube on a planet you haven’t already claimed, provided you have exactly the right ship value to do so, but it takes two actions instead of one. Note that you cannot remove another player’s cubes once they’re placed; the best you can do is try to prevent them from placing one in the first place. The first player to place all of their Quantum Cubes is the winner. 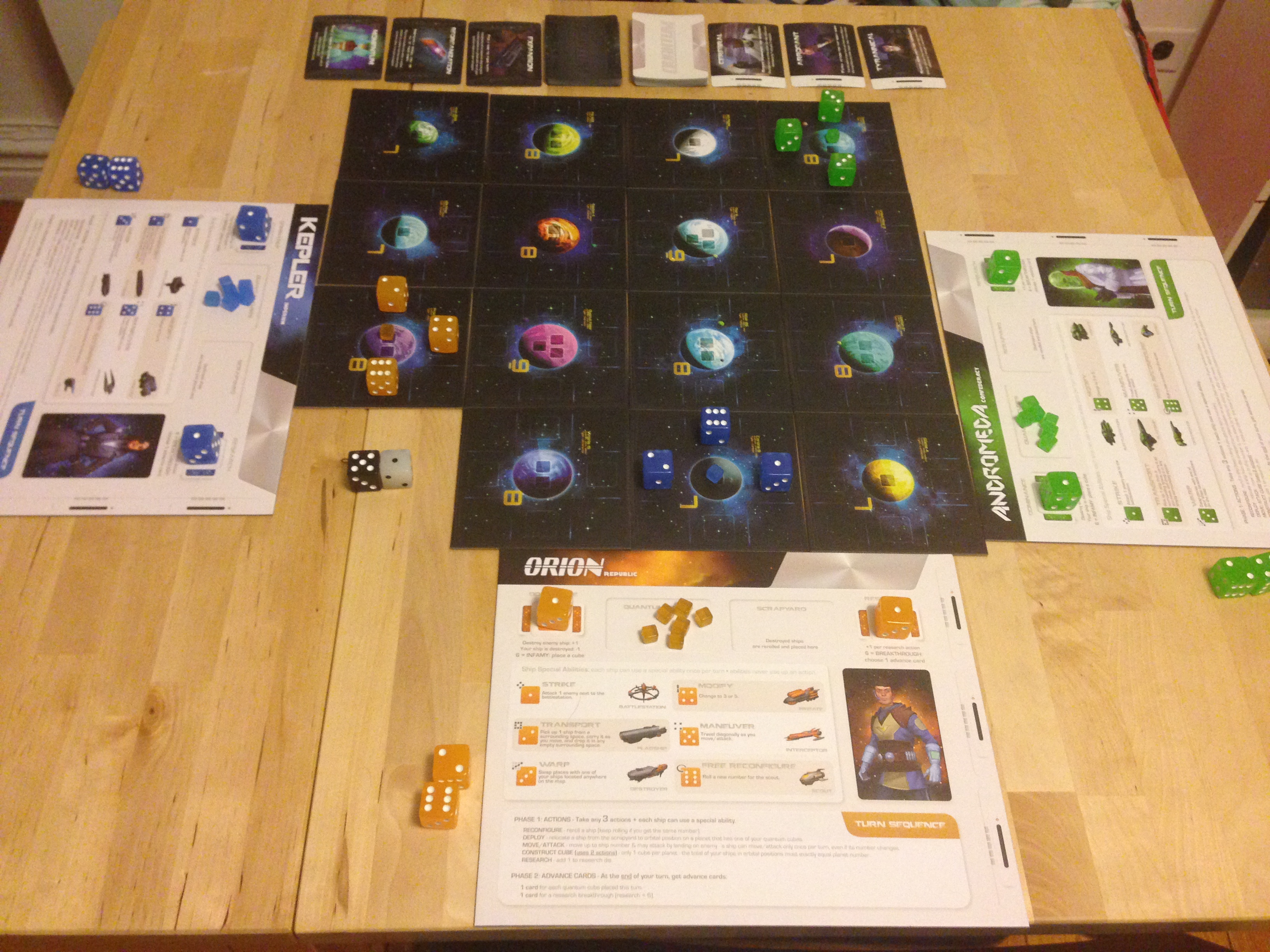 How far a ship can move is typically determined by the number of pips on the face of the dice, with each kind of ship having a unique special ability. For example, the Battle Station (a “1”) can’t move very far but can move/attack twice per turn, while the Destroyer (a “3”) may switch places with any of your other active ships on the map as a free action. Combat is also pretty straightforward, with the attacker rolling black and the defender rolling white. The player with the lowest cumulative value (i.e. ship value + attack/defense roll) is the winner. Attackers destroy their target (who then must re-roll their destroyed ship and place it in their Scrapyard), decide whether or not to move into their space, and tick up their Dominance counter while the losing defender lowers their Dominance (to a minimum of one). And once that Dominance counter maxes out at six, the player will be able to place a Quantum Cube on any unclaimed planet they’d like – anywhere on the map. There is no penalty for the attacker if they fail to destroy their target, so being aggressive is encouraged. It’s a really clever system that balances the speed of a ship with its power incredibly well, and the quick-references on the player board make it pretty easy to keep everything straight in your head.

If you place a Quantum Cube either normally or through Dominance, or your Research maxes out at six, you get to pick a Command or an Gambit card. These cards aren’t necessarily vital to winning the game, but they can certainly make a difference in your strategy. For example, some Commands (which are permanent effects you attach to your player board, up to three) will do things like automatically increase your Research as a free action every turn while others might allow you to re-roll dice when attacking/defending. Conversely, Gambit cards are one-offs that have their single effect and then are discarded. These may include fleet expansion, boosting your Dominance without fighting, or even taking another 2-action turn. 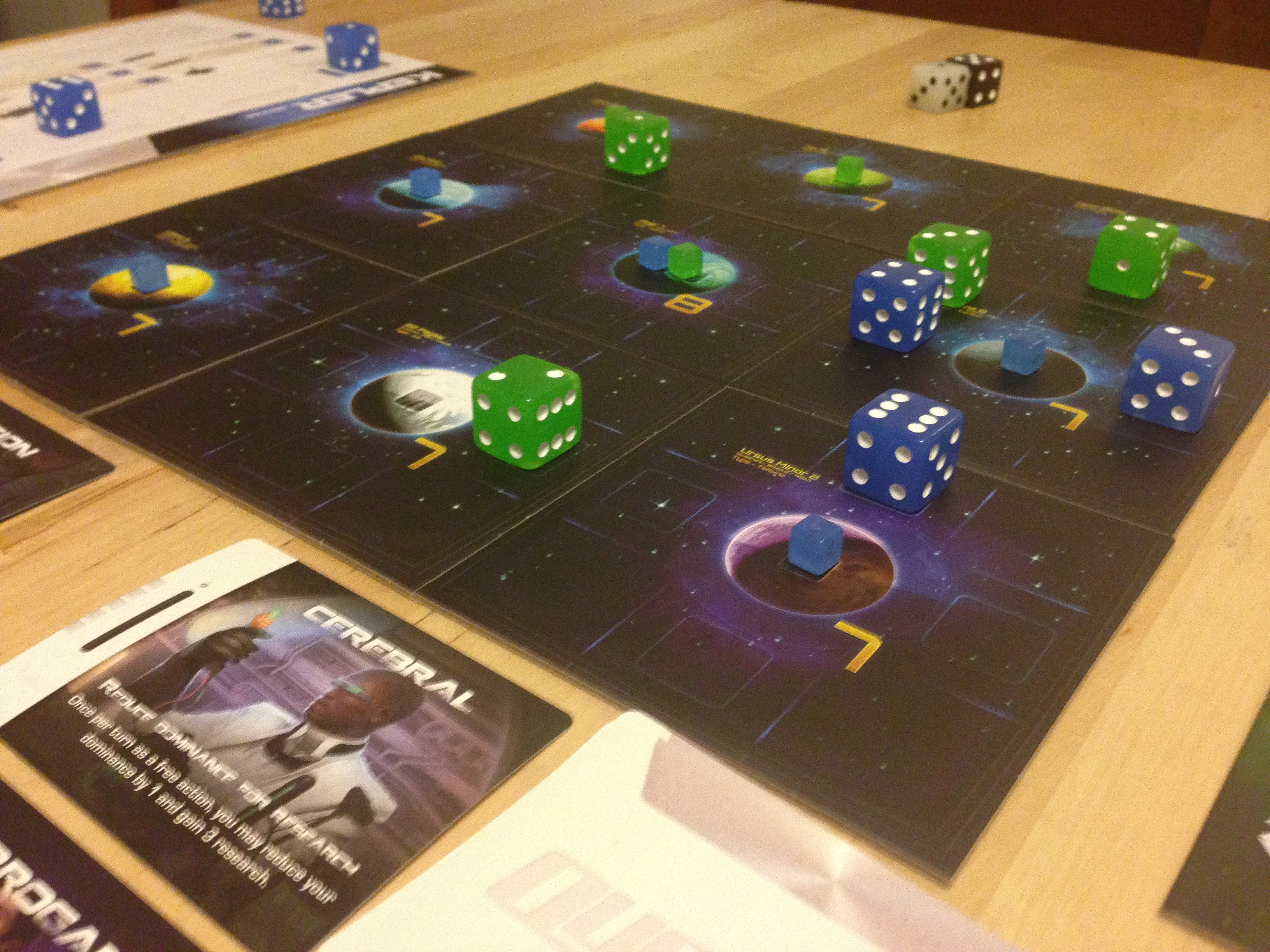 I’m probably making it sound a lot more complicated than it actually is. Quantum is essentially about positioning your ships and dropping cubes; the trick is in knowing how to put the ships you have to the best possible use. Strategies will change repeatedly as your ships are destroyed, paths are blocked or opened up, and new cards are played. It’s in a near-constant state of flux. I cannot stress enough just how much I enjoy playing this game. Although I’ve found that it’s usually best to avoid playing with an odd number of players. A one-on-one game can be fantastic as you and your opponent try to out-maneuver and out-plan each other. Four-player games are also cool and chaotic (in a good way) as things shift between more contained battles between two factions and a total free-for-all. With three players, however, it falls into that rut where (generally speaking) two players will be too busy dealing with each other to notice the third creeping up on them. That’s not to say it isn’t still fun, but if you can play with two or four players I’d definitely recommend that over three.

I absolutely love Quantum. Obviously it’s not as deep as some of the other 4X board games out there, but it distills the theme and gameplay elements quite nicely and takes a fraction of the time to complete. It’s the kind of game that’s perfect for getting a 4X fix when you don’t have several hours to burn or for players who love this kind of theme but aren’t necessarily looking for something that’s super-complex.

Quantum Review: Perfect for Getting a 4X Fix