Space may or may not be the final frontier, but regardless it’s definitively an unfriendly one. It’s a desolate vacuum filled with all sort of hazards, but somebody has to try and make a profit from it. I mean it’s space; which is exactly what Galaxy Trucker is about. That and watching helplessly as your seemingly well thought out ship gets torn to shreds because of a single design flaw. So good fun all-around!

Galaxy Trucker is just packed with little bits and pieces in addition to the double-sided ship blueprint boards and encounter cards. There are cubes for cargo, little spacemen to use for your crew, aliens, ship markers, these awesome translucent Tic-Tac things for battery power, and lots and lots of component tiles. These component tiles are the real meat of the game and are used to construct your ship at the begging of each of three rounds. Three kinds of connectors (one-slot, two-slot, and a universal three-slot) will determine how you can place them, which plays out a lot like a puzzle game, really. 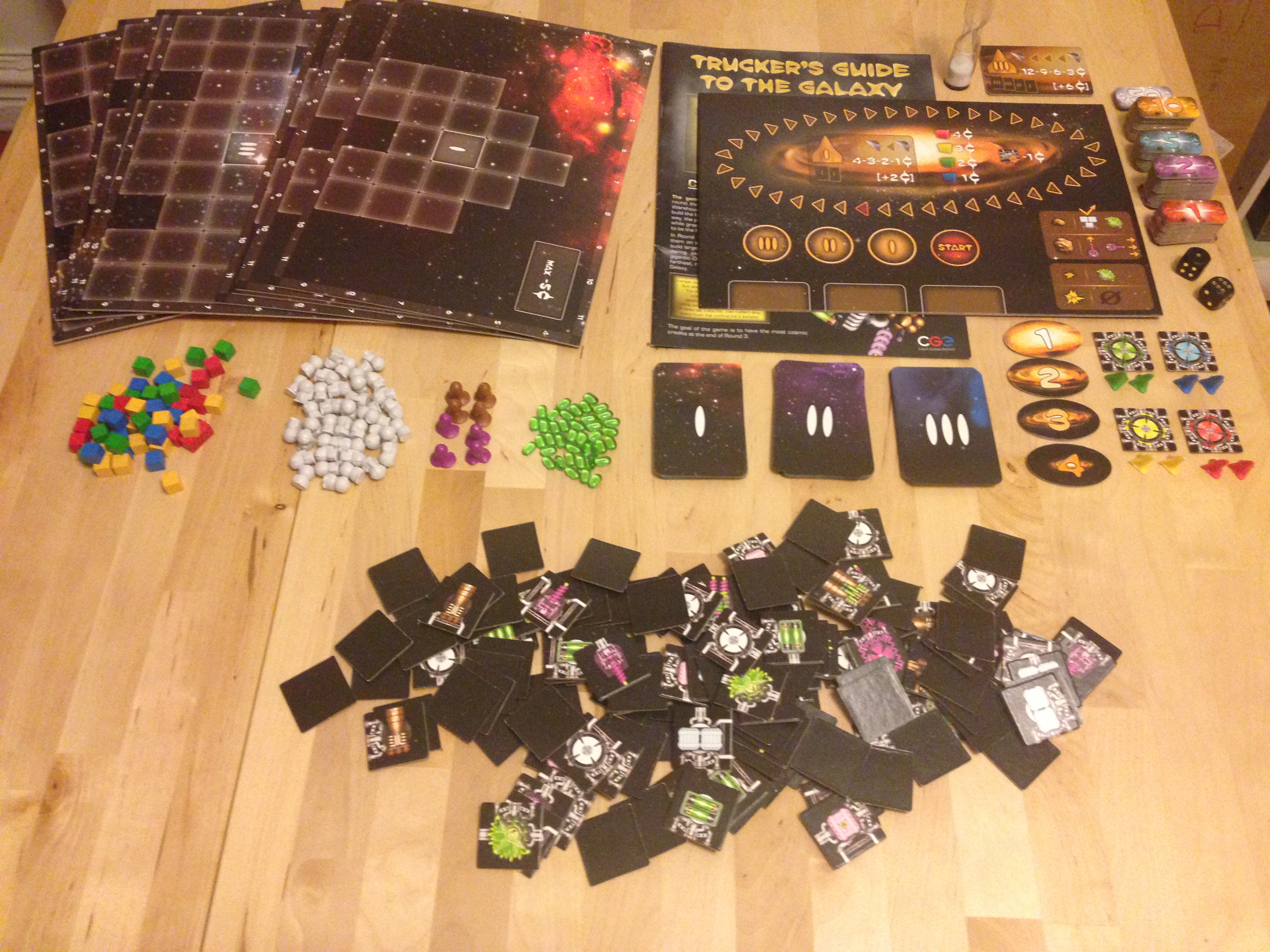 A game of Galaxy Trucker takes place over three rounds, with the player with the most credits at the end being declared the winner. Each round will have you building (potentially) bigger and more complex ships around your central player tile (color-coded for each of four players), while also facing more hazardous encounters on your adventures. At the beginning of a round, players will turn over a sand timer and start drawing face-down component tiles from the center of the play area. If they can – and want to – use a piece they draw, they can attach it to their ship and grab another piece; otherwise they may toss it back into the center face-up to either ignore, grab later, or be snapped up by another player. Actually constructing a ship can be quite a bit of frantic fun, as can checking other players’ designs once time is up and scanning for illegal tile placements. Assuming everything checks out you’ll then start placing crew members into empty quarters, dropping batteries on battery tiles, and so on. Oh, and the person who finishes first (assuming their ship is legal) gets to lead the convoy.

The action that takes place during each round is determined by flipping over encounter cards that were drawn before the build phase. These stacks get larger and more deadly with each successive round, and are what make Galaxy Trucker such chaotic fun. You see, depending on the encounter you may find planets to gather cargo, run into smugglers who will steal your cargo unless you have enough firepower to fight them off, or even space parasites that can drastically cut down the size of your crew. The kicker is that the player in the lead is the one flipping the card, and as such will be dealing with everything first. So if they flip planets they get first pick of cargo, but if they flip pirates they won’t be able to rely on a more gun-happy player to remove the threat for them. And while all of this is going on, players will also be gaining or losing “fight days.” This leads to a fairly constant shifting in leadership, and when you never know what’s going to come up next that could be as much a blessing as a curse. The Leader concept also all but eliminates lulls in the game’s progress due to player’s trying to decide what they want to do on their turn. Because there aren’t really turns, strictly speaking, and the only real decisions players have to make is whether or not they want to land on a planet, explore an abandoned space station, and so on. 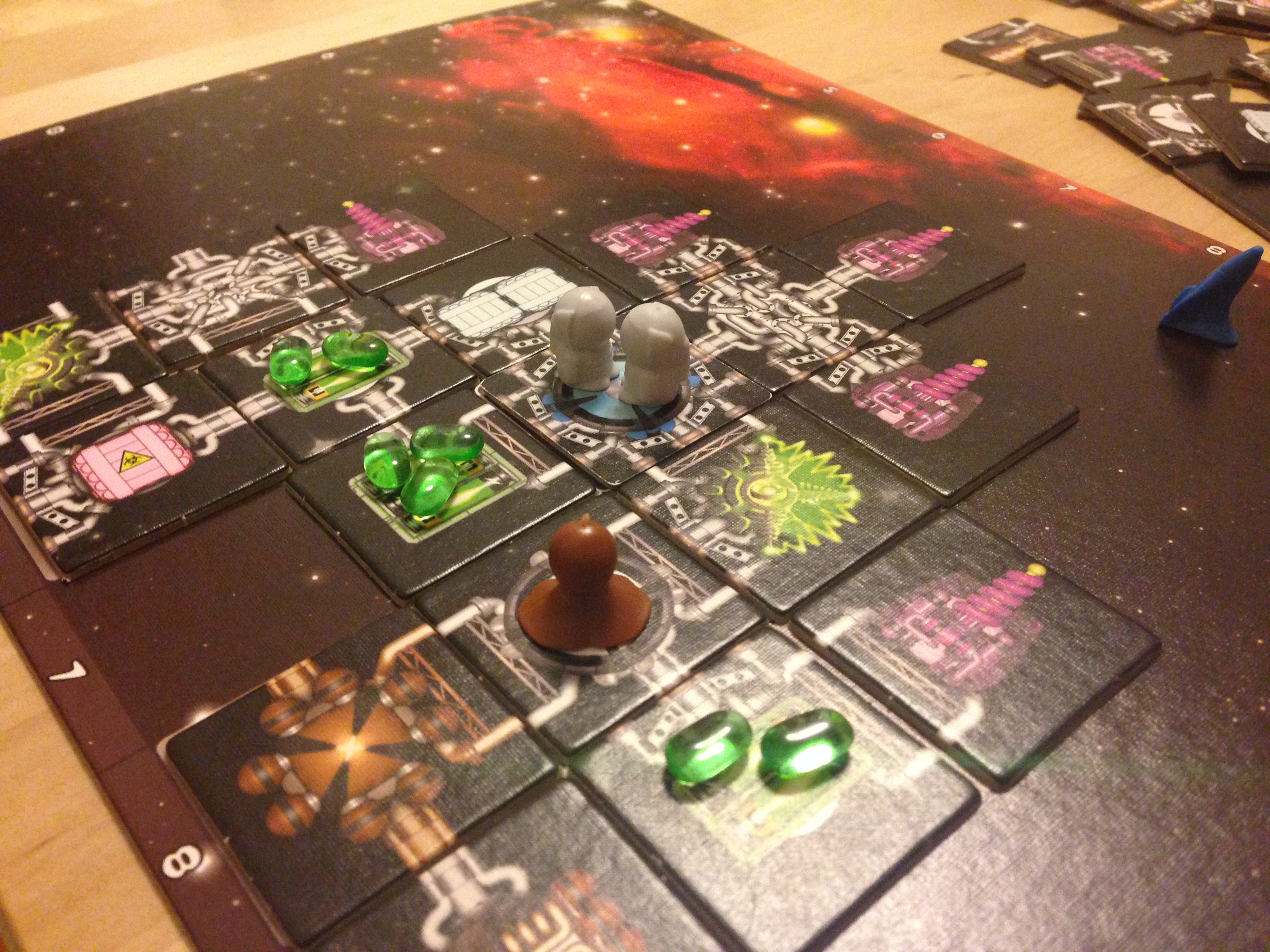 This is all in addition to meteor swarms, pirate attacks, and combat zones that can slice your ship to pieces if you aren’t careful. When attacks or meteor strikes occur, they come from a specific direction as indicated on the card. The leader rolls two dice, and the sum of their value determines where the strike will land. So a “6” coming from the Left will target whatever the first tile is in the “6” row, coming from the left-hand side, for example. Various factors can cause such an attack to miss (i.e. shields, an empty row/column, etc), but if it hits that tile is blown off your ship. And if that one tile is all that’s connecting a third of your ship to the center mass, well then you just lost a third of your ship, buddy. Cargo, crew, shields, engines, lasers, etc. If it’s blown off, you’re out of luck. Plus the destroyed components actually count against your earnings at the end of each round regardless of whether or not you manage to finish. 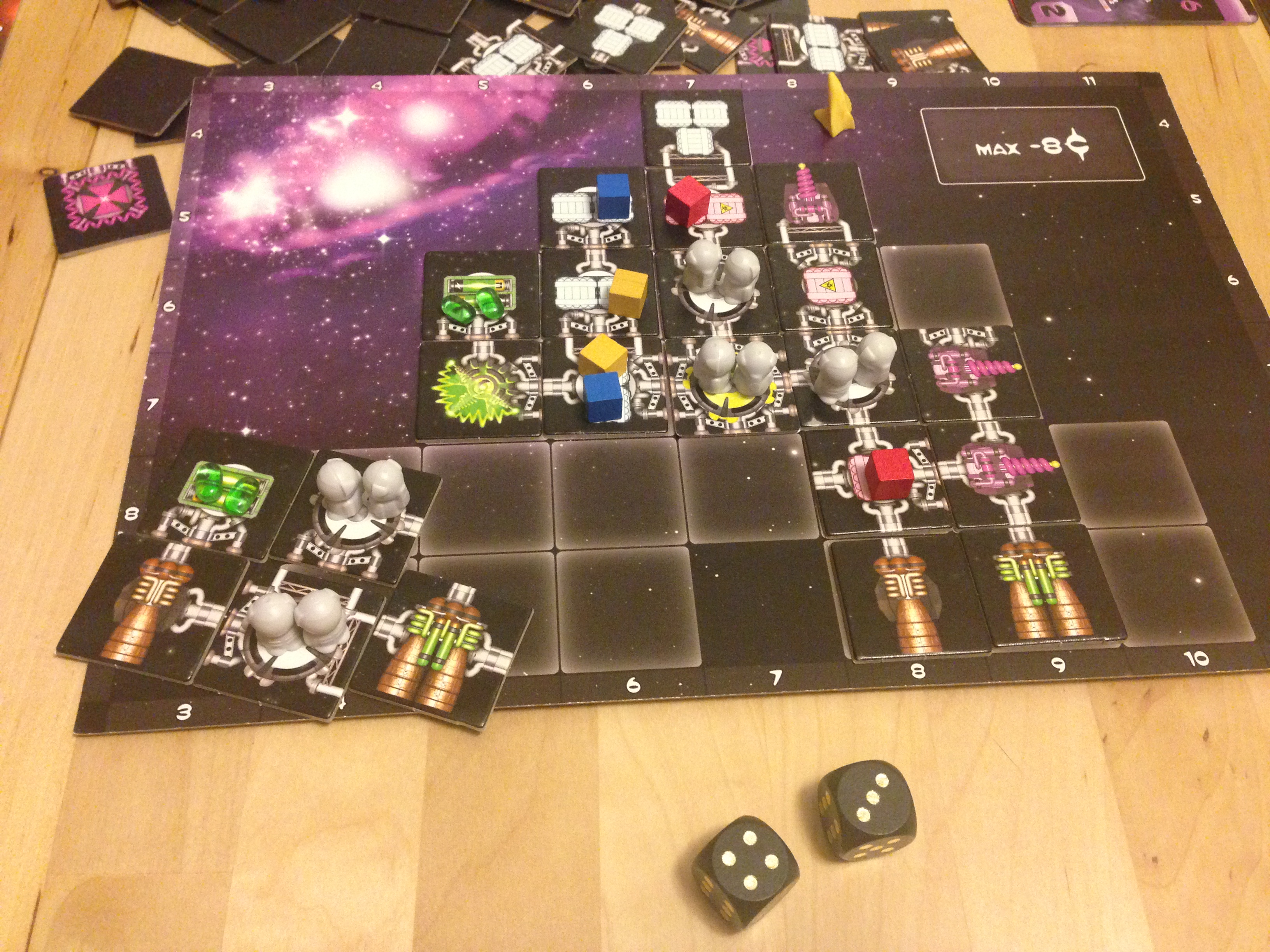 It may sound a bit harsh, and it really kind of is, but that’s what makes Galaxy Trucker so much fun. You never know what’s going to happen, and no amount of planning is ever enough. You could have a beast of a ship that fights its way through every hostile encounter easily, but lose your single engine in a freak meteor strike before hitting Open Space and you’re toast. Suddenly you get no bonuses for coming in X place and have no shot of earning the “Prettiest Ship” award (yes, that’s actually a thing). You can still sell your cargo, but only at half price and you’ll still have to deduct those destroyed tiles from your back account. The thing is, everyone is balanced on that knife edge. Because attacks and meteor strikes happen to everyone at the same time, and what’s devastating to your ship may do absolutely nothing to another player. It all comes down to where you built what and how the dice were rolled. This game is undeniably harsh, but it’s also very fair.

Galaxy Trucker is easily one of my favorite board games. It’s totally and gloriously chaotic, can cut a player down at a moment’s notice, and while it will leave them battered and bruised they’ll undoubtedly want to come back for more. It may not be friendly, but it’s remarkably fun.