Deck-builders were my gateway games. It started with Ascension: Chronicle of the Godslayer and just sort of snowballed from there. It’s fitting, really, because Star Realms was actually designed by a couple of Ascension alumni. However, while there are definitely similarities between the two, this is far from something as simple as “Ascension in space.”

Aside from the pedigree, one of the biggest qualities that drew me to Star Realms is how compact it is. All you need to get two players up and running is a single deck of 128 cards (rules included of course). Want to have a game with three to four players? Add on another deck. five to six? Add on another deck. It really is just that simple. The included rules even contain variants for more than two players, just in case you decide to expand your game later on. For the purposes of this review I’m just looking at the regular two-player version, but I’ve heard nothing but great things about Raid (one player is the “boss,” with a larger hand limit and more health, and everyone else is working together to bring them down). Although it’s definitely a bummer that some really cool cards (namely the Challenge cards that enable solo or co-operative play against large boss-type enemies) were only available to Kickstarter backers, and thus aren’t included in the basic set. Supposedly they’ll be available to order separately in the future, though. 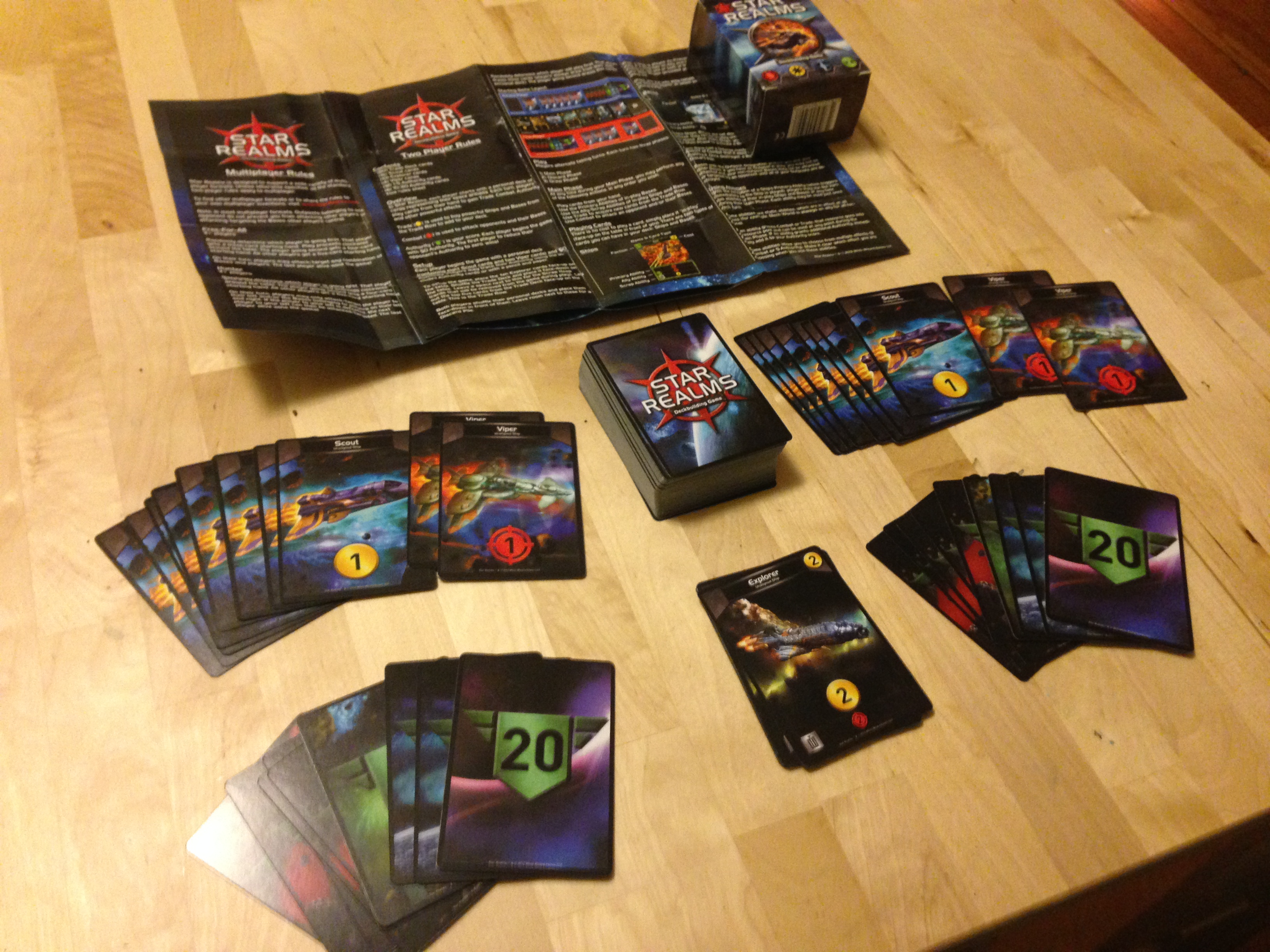 The cards in Star Realms are pretty great as well. The artwork is wonderfully varied for each of the factions, the numerous bits of important info are very easy to read, and (as I’ve said) it’s all so wonderfully self-contained. However, I’ve noticed that the cards are awfully slippery. I mean super slippery. It makes shuffling pretty easy, but it also makes keeping things organized on the table a lot tougher than I’d have liked. This is especially a problem when it comes to using the included cards to track Authority (Health, really). They really like to slip and slide all over the place. The box itself is a bigger disappointment, though. Maybe I was just unlucky, but the box my copy came in was extremely flimsy to the point that the glue barely seemed to be holding it together. Fortunately I had a plastic card box on hand that I was able to toss everything into; just be aware that you might want to transfer your cards to something a bit more sturdy. 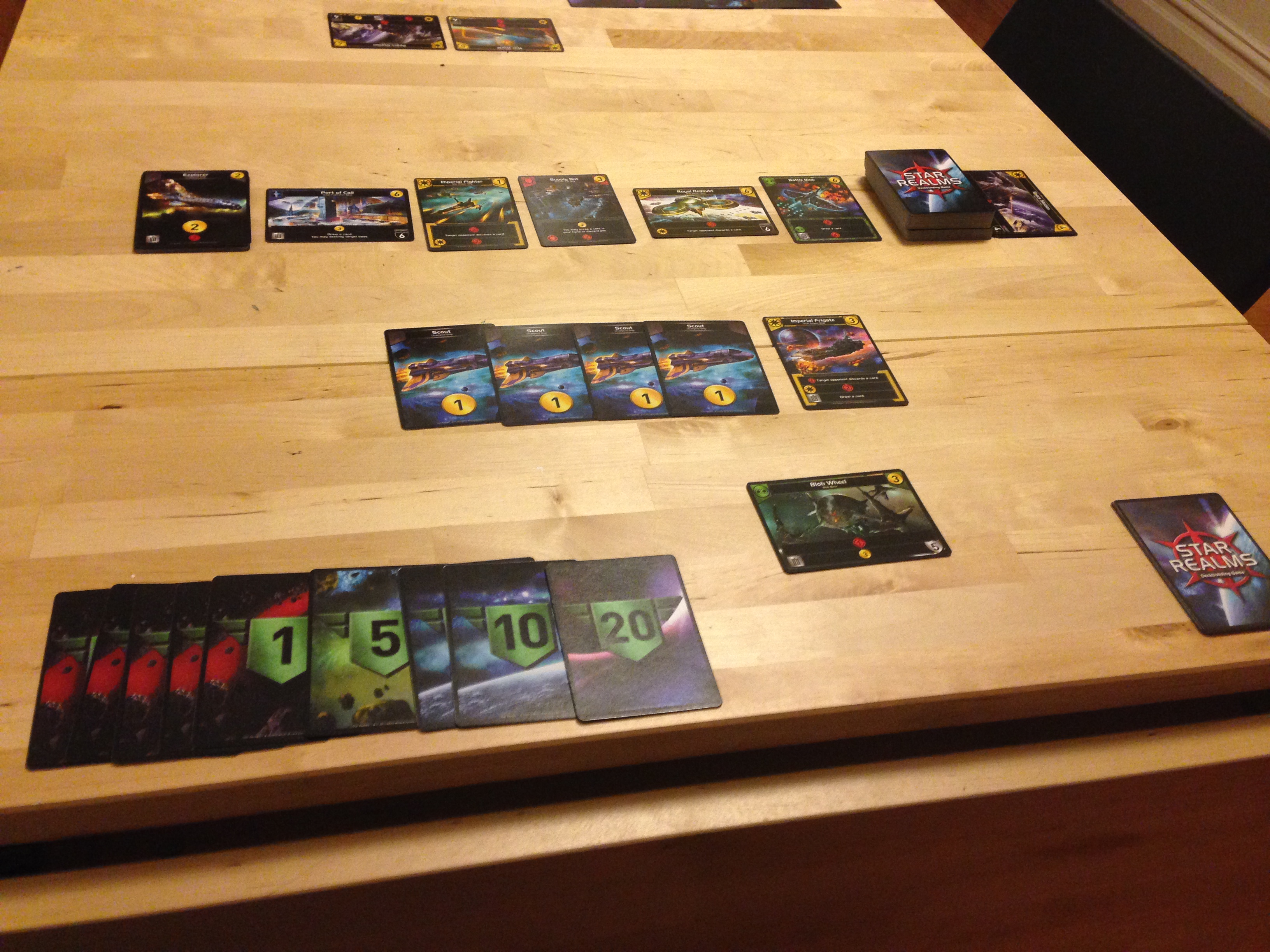 If you’re familiar with deck-builders (especially Ascension), then you should be able to pick up on Star Realms pretty quickly. Heck, even if you aren’t familiar with them it’s a very simple game to learn. Each player starts off with a set deck of ten cards and uses them to purchase more cards from the center of the table or damage the other player. Some cards will make it easier to buy even more cards later on, some will do more damage to your enemies, some may “heal” you (restore Authority), and some can do a combination of things. Where the strategic stuff comes in is in using faction bonuses, which are special abilities that can only be triggered if a card belonging to a matching faction is in play on your side. So for example, using two Blob ships will allow you to use either (or both) of their faction abilities, if they have any.

Another key difference is the use of space stations and outposts. Space stations stay in play once they’re used and can give players a number of different bonuses every turn. Of course your opponent can always try to blow them up so you can’t reap the benefits. Outposts are pretty much the same, except that they must be targeted above all else. So they effectively act as a shield for you and your regular stations. 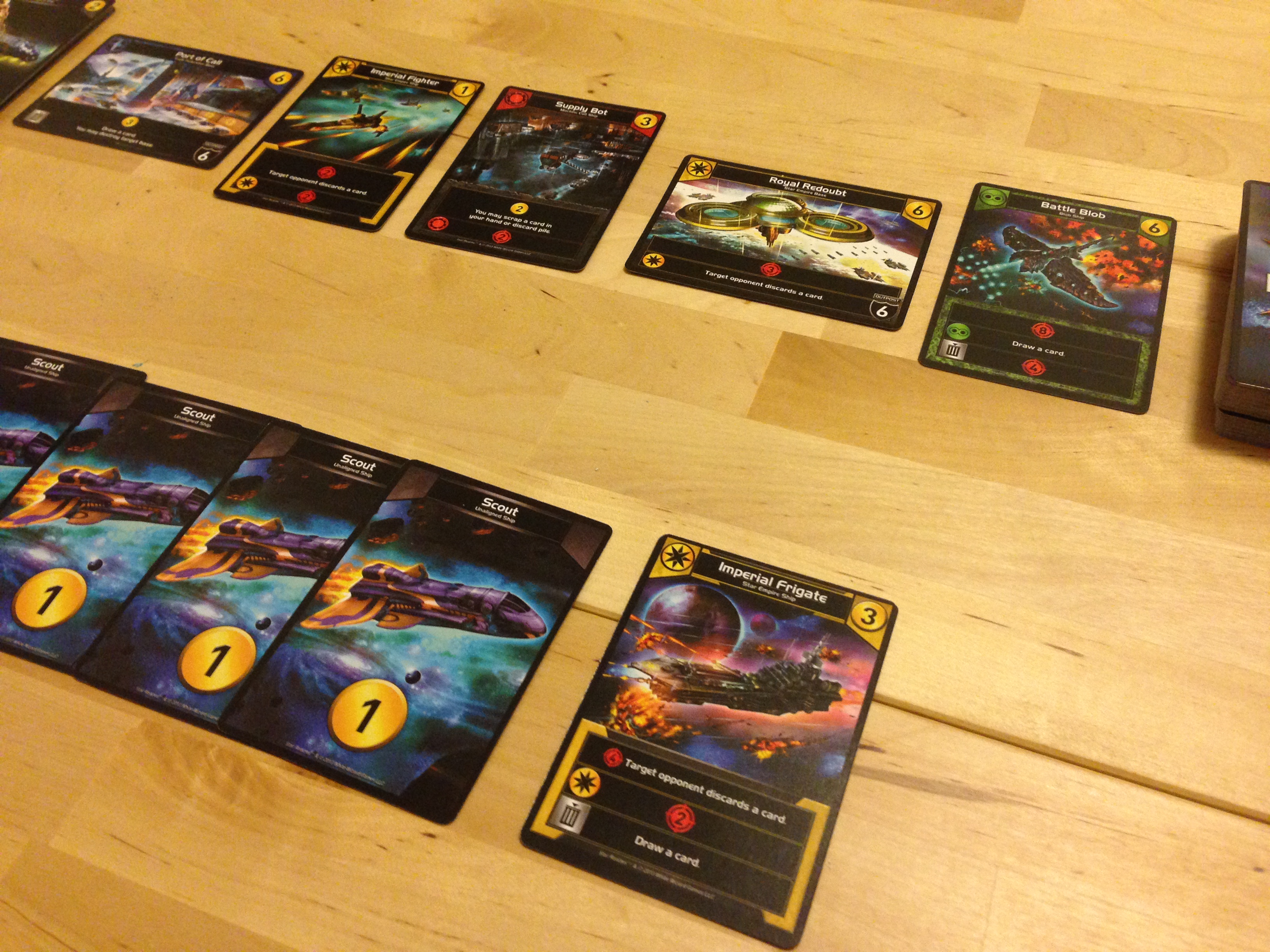 Then there’s the matter of “trashing.” You see, many cards (stations, outposts, and ships) have special trash abilities that can be triggered in addition to everything else they can do in a turn. The catch is that in order to use these abilities you have to remove the card from the game entirely. So, do you hide behind that outpost for another turn, or would it be better to trash it in order to gain a bonus to your attack power and deal a devastating blow to your unprotected rival? Or do you buy a card belonging to a faction that you aren’t really focusing on – but you know your opponent is – in order to make use of its trash ability later on and keep it out of enemy hands? There’s a lot to consider here.

Star Realms is a fantastic deck-builder that’s quick, easy to learn, and can be a heck of a lot more strategic than you’d think upon first glance. Being able to accommodate more players by simply adding another deck is also a really handy feature. Really, aside from a general disdain for deck-builders, I can’t think of a good reason for anyone to miss out on it.