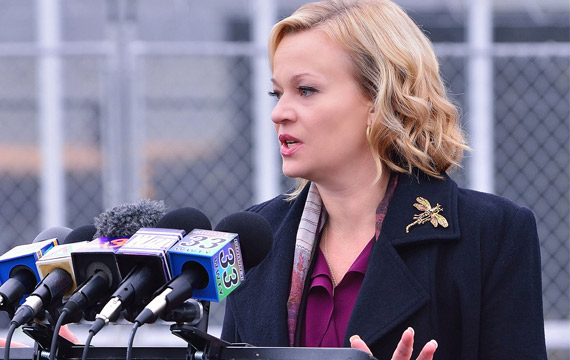 Councilwoman Justine Faraldo may be a new character on The Strain, but she’s wasting no time trying to eradicate the vampire problem that ‘s running rampant through New York, by any means necessary.

In the most recent episode of The Strain, Faraldo declared the burrough of Staten Island as a vampire-free zone, which made people happy. However her following display of victory/intimidation, in the form of mutilated vampires propped up on a chain-link fence, garnered some pretty mixed responses from the public.

Samantha Mathis plays the take-no-mess, upfront politician and recently talked to reporters about what else fans can expect from her character throughout the rest of the season (or however long she manages to stay alive), what she finds so “refreshing” about the role and more!

We were just as surprised as Faraldo’s public when the tarp was pulled off of her “monument”. Mathis thinks the scene was “really disgusting and disturbing”, but also says that it’s pretty indicative of who Faraldo is as a person. “It was pretty gross and pretty graphic, and I think really speaks to who she is. She’s got a message, and she’s shouting it from the rafters. She’s got a zero tolerance, and she means business.”

Getting deeper into the character that we’ve only begin learning about, it seems that Faraldo could end up corrupted while traveling down her vampire extermination path, a risk that usually comes with positions of power.

“I mean, this is a woman who certainly has a past, as exemplified from the episode just this last Sunday night,” said Mathis. “Staten Island has received sometimes less than stellar treatment from New York City [in the show]. So, I think that she is very protective of her people, and she’s very dedicated to her people, but there’s always a potential, when you’re in a position of power, to be corrupted by it. I think that her intentions are really true to protect her people, but that was one of the aspects that intrigued me about playing this character.

“Certainly, when it comes to being given a certain amount of power, the question is what do you do with that power?” she added. “With power comes great responsibility and we’re getting to see that Justine’s getting a little more power, and what will she do with it?”

Portraying Councilwoman Faraldo has been a great experience for Mathis so far. The actress admits that playing a woman whose role isn’t defined by her male counterparts has been “refreshing” for her. “I have to say that what’s been really exciting for me in playing Justine Faraldo is that I am, in fact, there as a woman who’s standing on her own two feet, who has a history and a past and is very strong,” she stated.

“So that’s really actually been really refreshing for me. In fact, when I first started, I thought what feels different? Oh wait, I’m not playing someone’s wife or mother. I’m a politician, and I’m there to be a strong woman and to be unapologetically strong and calling bullshit on all the bureaucracy and hypocrisy that she sees.”

As it relates to the main characters of the show, Faraldo’s plotline hasn’t intersected with anyone elses thus far, but Mathis assured us that will change. “My character, at this point, is rather isolated, but I will be crossing paths with more characters.”

Keep up with what happens to Councilwoman Faraldo in new episodes of The Strain, airing Sundays at 10pm on FX.