I didn’t think it could be possible to ever really fall in love with a demo, especially such a short one. However, I very much did as I entered a realm of pure happiness with the Gnomes & Goblins preview that’s now available on Steam for the HTC Vive.

If you have an HTC Vive and have yet to play the preview of Gnomes & Goblins, then please go do so now before you even think about continuing to read this. If you don’t have a Vive and want to know why I love this preview so much, continue on.

My Virutal Reality experience so far has been one that’s featured a lot of quick arcade-like games and hasn’t featured any real environmental interactivity. I honestly had no idea what I was even walking into with this demo as I didn’t know much about it except some folks really like it and it’s created by Jon Favreau, director of The Jungle Book, Chef, and Iron Man (also known for acting the part of money-man and punching bag on Friends). 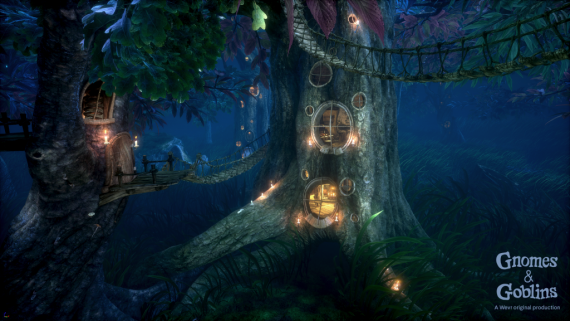 When I first entered the world of goblins I was met with a very beautiful landscape in the middle of a forest with trees that have little homes inside and bridges that connect them. I wasn’t really sure what to do at first besides just stare at the beauty and enjoy the elements around me. However, it didn’t take long to start hearing noises from goblins in the grass and up in the trees.

Now, again, I had no idea what I was supposed to be doing, and the last experience I had with goblins is when I had to defend my base from them attacking it in a different game. So, my initial thought was to use the Vive controls to pick up acorns to throw at them whenever they showed themselves, but each time I did that they just simply ran away.

I finally settled down and realized that the goblins in this game weren’t a threat. However, I was also out of acorns so I didn’t really have much choice at this point except to see what happens. That’s when everything changed.

All of a sudden it wasn’t a goblin from my past video game experience that came out of the woods, it was just a little guy who was curious about me. He stopped for a minute until I walked near him, and then he ran away again.

Shortly after I hear rustling in the tree above me and see another goblin struggling to reach for an apple that’s hanging down from it. I look around me again and notice a stick on the ground, so I grabbed it and hit the apple off the branch and then picked it up. A few seconds later the little guy came out from the bottom of the tree and so I gently passed the apple to him. He grabbed it, made a little noise and ran back inside. That’s when I fell in love with the little guys!

Not long after the goblin retreated back into the tree with the apple he came back out with a bell and gave it to me. That’s when I picked it up and began to ring it. All of a sudden this lovely world became even more alive with beautiful lights flying all around me. That’s when I shrunk to the same size as the goblin and was able to navigate around their tree houses and see the world from their point of view. That’s also when all the magic happened and I completely fell in love with the entire experience. 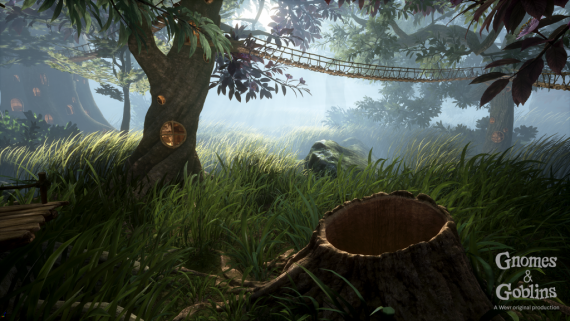 The player has a minute to look around from different locations, including inside the treehouse and at the top of one of the bridges. But once they set down the bell is when the demo comes to an end. Sad face.

It’s incredible how just a few short minutes turned into a purely wonderful and magical experience in the world of virtual reality. I, of course, had to play it again and try different interactions with the goblins on the second playthrough. This time I didn’t throw anything at them, but instead nicely tossed acorns in their vicinity to help them out. Because of this demo I pretty much went from not liking goblins to absolutely loving them and wanting to buy a plush right away! Get on it, guys!

The Gnomes & Goblins preview is pure magic, a fairy-tale moment that is absolutely delightful. I’m now completely excited for what’s to come once the full game releases.

Gnomes & Goblins: I Fell in Love with a 10 Minute Demo