The Lenovo IdeaCentre AIO Y910 is an all-in-one gaming PC that comes equipped with the powerful GeForce GTX 1080 for incredible gaming. Along with the great graphics card, it also hosts 16GB ram and an i7 6700 CPU. All of this sits directly behind a beautiful 1440p monitor. I’m already far beyond impressed. 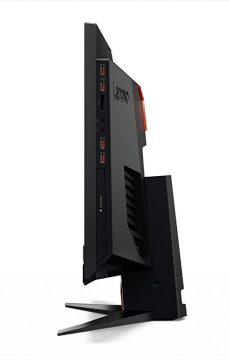 In the past I thought all-in-one PCs were neat, but they never carried the capabilities needed to perform as a quality gaming computer. So, the fact that this beauty that I’m testing rocks an i7 processor and GTX 1080 graphics card, I’m finally happy to be able to test one of these machines and see exactly what the performance is like.

While I will always prefer building my own PC over owning anything else (yes, I prefer taking up space with a massive full size tower), it’s really nice to look on my desk and only see a monitor with a slightly bigger stand that has a power cord sticking out of it. Looking at the IdeaCentre AIO Y910 head-on appears as if I only have a monitor. If I look at it from the side, it still doesn’t look nearly as big as one would imagine. It’s incredible just how skinny it actually is, and it’s amazing to have it all right there on the desk. By the way, the display also features a hook to rest your headphones on. It appears to be the perfect all-in-one PC for gamers. So, I am really quite impressed!

The Lenovo IdeaCentre AIO Y910 compacts the power of a gaming PC into a sharp and sleek looking display. The entirety of the machine looks great, but now the question becomes how well does it perform? Well, I spent the majority of my time with it testing For Honor. Here’s a game that runs incredibly well at 1440p and reaches far beyond 60 FPS with max settings (outside of AA).

Check out gameplay of For Honor below in 1440p while playing on the Lenovo IdeaCentre AIO Y910.

Now what concerns me the most about the Lenovo IdeaCentre AIO Y910 is that the processor gets far too hot. There are vents along the back of the display that allow it to breath, however temperatures still reach close to 90C. In fact, I’ve seen spikes hit 94C. That’s far hotter than what I’m comfortable with. Heck, my personal PC sits around 55 to 60C. Some test machines I’ve used recently reach upwards of 70, but nowhere near 90 – that’s way too hot for me.

I have noticed a fan kicks in when the CPU reaches 85C and only goes in short bursts. When idling in Rise of the Tomb Raider it would average around 85C. Every time the temperature spikes above 85 you’ll hear the fan kick in to help knock it back down to the lower to mid-80s.

Because of how hot it’s getting I decided to run the Fire Strike Stress Test with 3D Mark to check the CPU’s temp. This ended up showing me that the frequency is reaching higher than what’s intended for a locked i7 6700. This is most certainly the cause of the extreme temperatures.

I got into the BIOS and noticed that Turbo mode was activated which was causing the frequency levels to reach beyond the intended statistics of the CPU. By disabling Turbo Mode the CPU temp became much cooler and the frequency remained stable at its intended level. And while the temperature did start out in the 60s, over time it did eventually get back to around 75 degrees Celsius which is still much better than the average of 85 with spikes into the 90s. I’ve included two Fire Strike Stress Test videos below that show the difference between Turbo mode enabled and disabled. 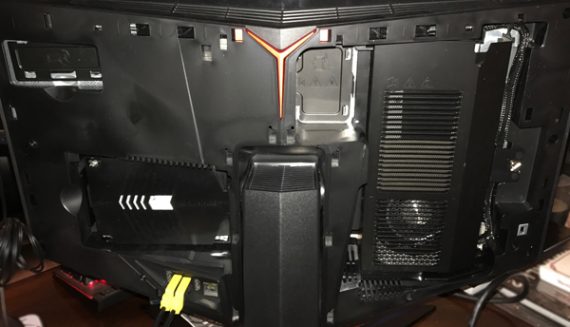 I also made additional changes to get a steadier clock speed from the GTX 1080 Founders Edition graphics card by increasing the power percentage slightly to 110%. This allowed the second test to pass the stability test as it was failing prior to these changes. However, I must note that the GPU temp did reach 84 degrees Celsius when increasing the power percentage compared to about an 82C average when the power was at 100%.

However, what made a huge difference in temperature for the GPU is that I removed the back panel that covers the graphics card. By doing this, I reduced the GPU’s temp from 84C to about 72C. This is a significant difference. When looking at the back of the display with the panel off, the components are still very well protected. I don’t understand why they would have a somewhat thick piece of plastic with poor airflow covering the GPU. This is the big issue with this PC. I feel that the back-cover plating could be lighter with more venting for easier breathability for the GPU. I would advise purchasers of this AIO PC to leave the back panels off while making sure to use an air can on the area from time to time.


Here are two more looks at the performance of the PC by playing Rise of the Tomb Raider.


Understandably the Lenovo IdeaCentre AIO Y910 is going to run warmer as it is compacted into the back of the monitor. Thankfully with my changes in the settings and by removing the back panels I did get a cooler atmosphere established for the PC. As a result, I’m no longer scared by it, because if I couldn’t get those temps lowered I wouldn’t want anything to do with this PC – no matter how awesome it looks and how fun it is to game on. But now that I’ve found a more stable PC atmosphere for quality gaming, I’ve fallen back in love with it.

The Lenovo IdeaCentre AIO Y910 is beautiful, powerful, and an awesome machine to game on for something that’s so compact and takes up very little space. It has everything a PC gamer needs for enjoying the best games out there. It just needed a few tweaks before it became ideal. The power of the GTX 1080 within, mixed with its beautiful 1440p display, creates gorgeous gaming experiences worthy of PC gamers. However, I still wish it came with better designed back panel covers to help with the temperatures. Besides that, it’s an absolute pleasure to use for playing all of the latest games.