Who lives, who dies, who tells your story?

In the case of much loved and acclaimed broadway Musical Hamilton, Disney will be the one to tell that story on the big screen!

The Walt Disney Company, along with Lin-Manuel Miranda, Jeffrey Seller, and Thomas Kail, announced the news this morning. They are bringing the 11-time-Tony Award®-, Grammy Award®-, Olivier Award- and Pulitzer Prize-winning Broadway musical to theaters! (And they’ll likely add an Oscar to that award list as well. We’re already calling it. Disney would have to massively mess this film adaptation up to have it not bring a serious force to next year’s Oscars, and we doubt they’ll mess it up.)

The film adaptation of Broadway musical Hamilton will be released in the United States and Canada on Oct. 15, 2021. Although that’s over a year away, we already have some details about the film for you!

The film of the original Broadway cast performing Hamilton is a leap forward in the art of “live capture.” The movie will bring the audience into the world of the Broadway show in a uniquely intimate way. They will be combining all of the best elements of live theater and film. As a result, it will bring you a whole new way to experience Hamilton! 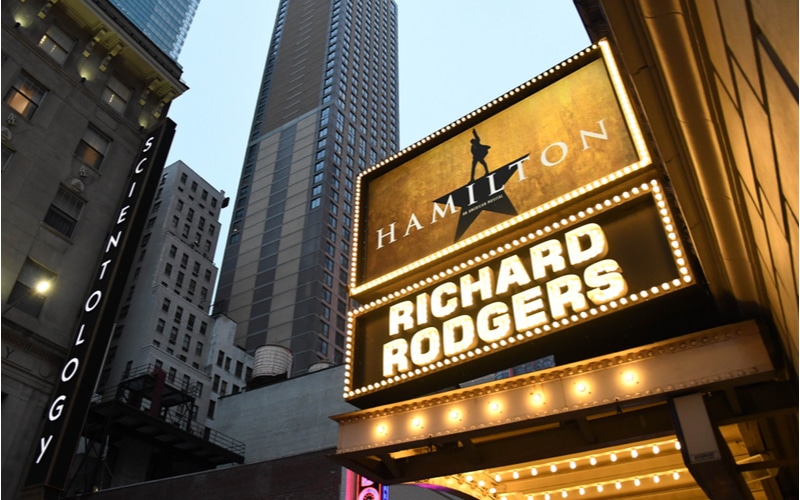 What Will The Hamilton Movie Bring Us?

Producers for the Hamilton movie will include Lin-Manuel Miranda, Jeffrey Seller, and Thomas Kail, who will also direct.

Here’s what the crew of Hamilton has to say:

“Lin-Manuel Miranda created an unforgettable theater experience and a true cultural phenomenon, and it was for good reason thatHamiltonwas hailed as an astonishing work of art. All who saw it with the original cast will never forget that singular experience,” said Robert A. Iger, Chairman and Chief Executive Officer, The Walt Disney Company. “And we’re thrilled to have the opportunity to share this same Broadway experience with millions of people around the world.”

“I fell in love with musical storytelling growing up with the legendary Howard Ashman-Alan Menken Disney collaborations –The Little Mermaid, Beauty and The Beast, Aladdin,” said Lin-Manuel Miranda. “I’m so proud of what Tommy Kail has been able to capture in this filmed version of Hamilton– a live theatrical experience that feels just as immediate in your local movie theater. We’re excited to partner with Disney to bring the original Broadway company of Hamilton to the largest audience possible.”

“We are thrilled for fans of the show, and new audiences across the world, to experience what it was like on stage – and in the audience – when we shot this at The Richard Rodgers Theatre on Broadway in June of 2016. We wanted to give everyone the same seat, which is what this film can provide,” said Thomas Kail.

In short, our excitement for the film adaptation of Broadway musical Hamilton is through the roof!! Of course, we already know Lin-Manuel Miranda will bring us nothing but the best! And we can’t wait to see what it looks like on the big screen!  While you are waiting for the cinematic version to premiere, check out tour dates of the Broadway musical, as nothing quite compares to seeing this musical live!
Did any of you see this coming? We may have had bets on when it was going to happen… It was just a matter of time! Let us know what your hopes are for the Hamilton movie in the comments below!
Recommend0 recommendationsPublished in Featured, Movie News, Movies
Categories: Featured, Movie News, Movies
Tagged: Broadway, Disney, film, Film adaptation, Hamilton, Lin-Manuel Miranda, Musical, Walt Disney Company

Disney Is Releasing A 'Hamilton' Movie with Lin-Manuel Miranda!