Mario, Peach, Luigi, Daisy, and a whole bunch of other familiar characters (yes, even Yoshi) are back and ready to go clubbing. Get it!? Because golf clubs! I know, I’m sorry. But most of the Mario crew is indeed back and they’re all vying for the lowest score once again. You know, because golf. I’ll stop, I promise. Anyway, where does Mario Golf: World Tour fit in the rest of the multi-platform spanning series of professional golf for Nintendo mascots? Comfortably at the top as far as I’m concerned.

Everything you’d expect from a Mario Golf game is present and accounted for in World Tour. The various displays make it relatively easy to figure out where your shot will end up – assuming you can account for the wind, slope of the ground, and don’t fumble your swing, of course. You’ll have plenty of notable characters to choose from including Mario, Daisy, Bowser, Boo, Wario, and so on. Everything is super-colorful. Like I said, it’s everything you’d expect. 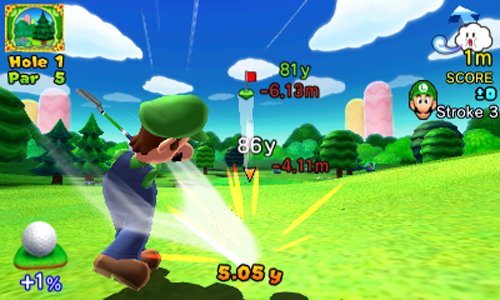 There were also plenty of things I wasn’t expecting, to be honest, and that’s a very good thing indeed. Mario Golf: World Tour is split into two sections: Mario Golf and Castle Club. Mario Golf mode is closest to the typical Mario Golf experience, with solo options for stroke and match play, speed golf, point tourneys, and special challenges that will earn you coins. It also includes local, online, and community versus modes. Finally there are the scheduled tournaments against the rest of the community, in which simply participating can earn you some pretty nifty gear for your Mii. Like I said, it’s closest to the typical experience. It also happens to be even better thanks to the wealth of options and choices at your disposal, all of which are very easy to jump into. Even tournament play against the online community is a snap and only really requires an internet connection when it comes time to upload your scores.

The Castle Club is another beast entirely, although it does still involve the act of playing golf. This is where you’ll really put your custom golfer through their paces. You earn coins through regular play (and through all sort of irregular play), spending them at the pro shop on gear and clothing you’ve unlocked, and take part in a somewhat obscene amount of tournaments against the Mushroom Kingdom’s finest golfers as well as the rest of the online Mario Golf community. When I first stepped in to the Castle Club I thought it seemed a bit too simple and dull, but after a quick practice round to determine my handicap it opened up significantly to the point that it was almost overwhelming. I mean seriously, if you can think of it, there’s a good chance they have a tourney for it. In addition to all the regular tournaments you can take part in, you’ll also find plenty of competitions that will require you to collect as many coins scattered around the course as you can – which completely ignores golf’s core concept of putting a ball in a hole. And virtually every single tournament you enter will earn some sort of item for your in-game Mii to equip. Finishing a game also unlocks new items for purchase constantly. You’re always unlocking something in Mario Golf: World Tour, and it’s totally addicting. 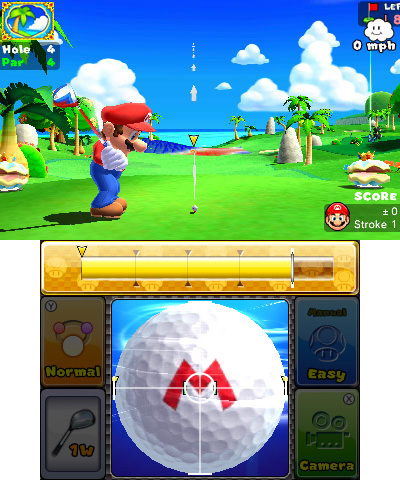 Actually playing Mario Golf: World Tour is almost as much of a pleasure as the overall grind for golf loot and the ridiculous amount of game options. For one thing, the two different shot types (Easy and Manual) should satisfy those simply looking to have fun and those looking for a more in-depth golf game at the same time. Easy is pretty straightforward, but Manual is definitely the best way to play. It gives you the ability to make a lot more adjustments to your shot, including adding backspin, curving the ball, and so on. And once you get the hang of it (as well as maybe spend a few minutes going over a few lessons with Toad) you probably won’t want to switch back to Easy ever again.

Mario Golf: World Tour is also a very pretty game – especially once you start seeing some of the more ridiculous courses. Giant Goombas and topiary Luigis? Sure, why not. The characters look great and animate quite nicely, and each of them has their own unique victory (and defeat) celebrations. The courses are extremely colorful and vibrant, and the grounds for the Castle Club are surprisingly large. Although that size works against it sometimes as it can feel like a hassle to have to wander across several screens in order to find the appropriate course. I get that golf isn’t an adrenaline-fueled sport and all, but would a quick menu or something have been out of the question?

It’s also somewhat disappointing that the feedback for putting still seems a bit off. I remember it from Toadstool Tour, and it was the bane of my existence. Putting just never seemed consistent, and it made me a lot more angry than it probably should have (there was much swearing). World Tour feels a lot better, certainly, but there have still been several occasions where I just couldn’t figure out why one shot would go wide and way too far while another would be on-target and come up several yards short; even after taking the time to learn more about course sloping and terrain variations from Toad. The rest of the club-related stuff feels totally fine though. Except when I time my shot poorly, but I can hardly blame the game for that. Or can I..? 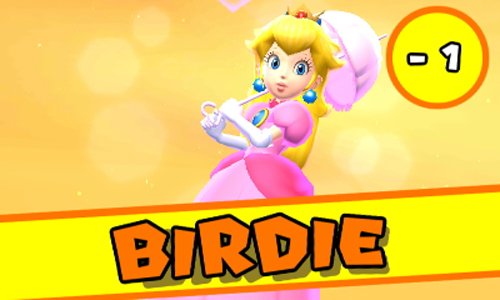 Mario Golf:World Tour initially seems like more of the same, but that isn’t the whole story: it’s “more” but it’s also better, which is a fantastic combination. The sheer variety of characters, extra game modes, tournaments, unlockables, and online play are more than enough to keep you swinging, but even if you took all of that away it would still be a very solid experience.

If golf is supposed to be a good walk spoiled, then Mario Golf: World Tour is a good walk that’s learned to appreciate the value of an honest day’s work.