We were in some serious trouble. We’d been running out of time for what felt like hours. When the ship came out of hyperspace too close to a sun, none of us had any time to think; we just had to react. I’d been trying to do what I could to keep the shields operational long enough to buy us some time. Things were going pretty well at first. That is, until a series of solar flares ripped through our shields and dropped life support into the red. Thank goodness for Baxter and his lack of lungs. If it weren’t for that hulking maintenance robot we’d probably be toast right now.

Damage Report drops two to six players into what could best be described as a series of sci-fi worst case scenarios. Having the hyperdrive fail right next to a sun, then having to scramble to get it back online before the ship is incinerated, is just the first of many possible scenarios. Because of this, the box comes with a lot of components. Rooms, corridors, player boards, player tokens, several decks of cards, a timer, six sand timers, and a whole bunch of other miscellaneous bits. Seriously, it’s packed to the proverbial gills. Thankfully you won’t need all of them right off the bat. The various pieces will be mixed and matched depending on the scenario, so it’s not quite as overwhelming as it sounds. 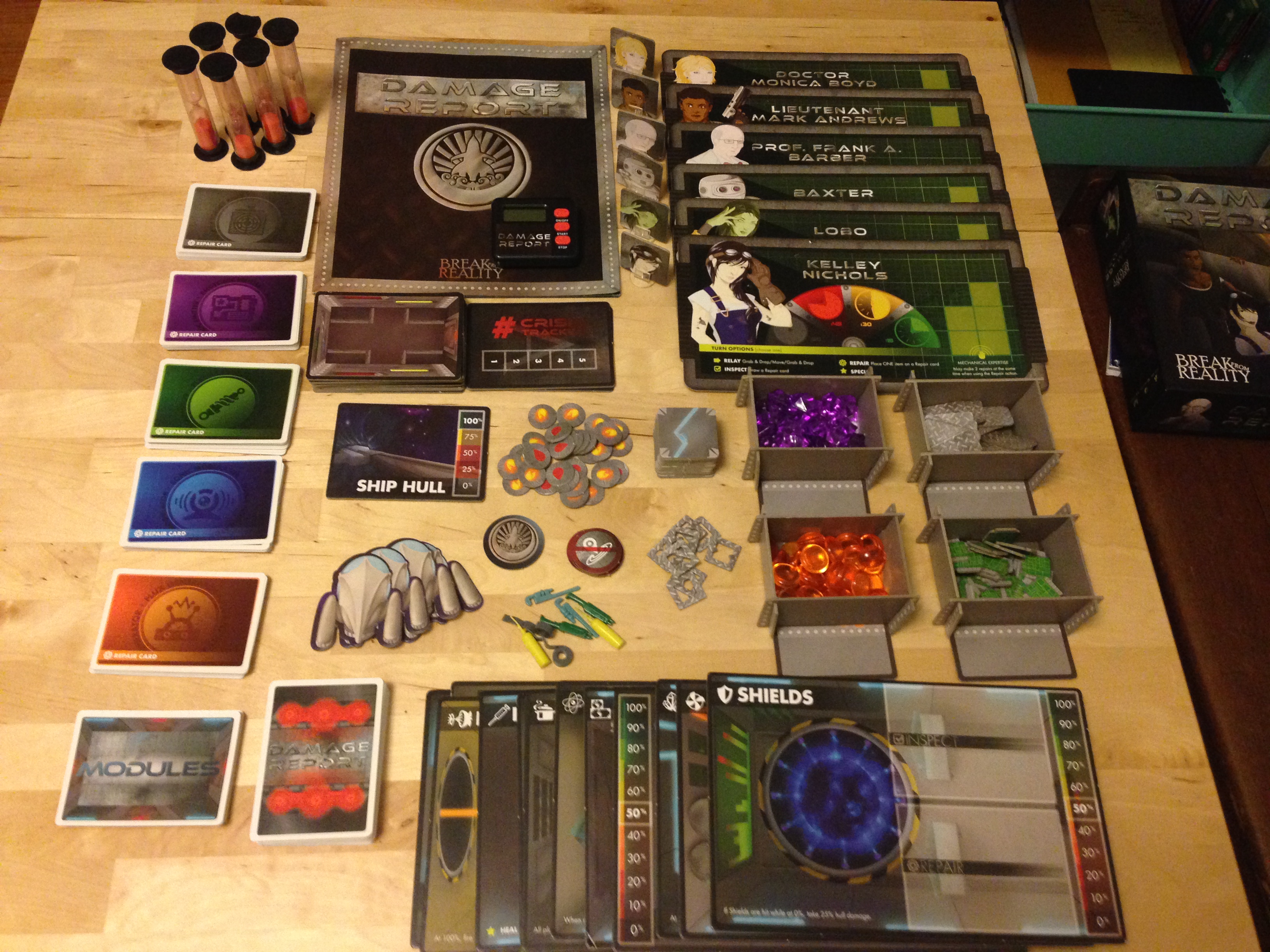 That said, it was rather unfortunate to open the box for the first time and find everything in such a sad state. Many of the items I’ve listed come loose, and had been rattling around during delivery. Several boards (nice ones, too) were dinged and scratched, and at least half of the sand timers had broken bases. Although now that I’ve unpacked everything, punched out three sheets worth of tokens, and bagged everything the contents are much more secure. Still, it was pretty disappointing to see so many damaged pieces immediately after taking off the shrink wrap.

Playing Damage Report is far more satisfying, however. At least it can be. It’s a very tense game, where all players take their turns at the same time and race against a timer that never stops. Depending on how life support is doing they’ll be fortunate enough to be able to act once every 15 seconds, but if things get really bad it’ll take significantly longer. This leads to having more time to plan and discuss strategy, but also means you’ll be staring daggers at your sand timer until it runs down and you can move again. Actions are also fairly limited, which makes having to wait so long for a turn all the more excruciating. You can move to one adjacent room and pickup/drop items (so long as you’ve got space in your inventory), place one inventory item on a repair card (cards typically require 3 or more items to be considered “fixed”), flip a repair card over (in order to discover what needs to be done for the next series of repairs), or using a special action (which is dependent on the character or modules in the scenario). 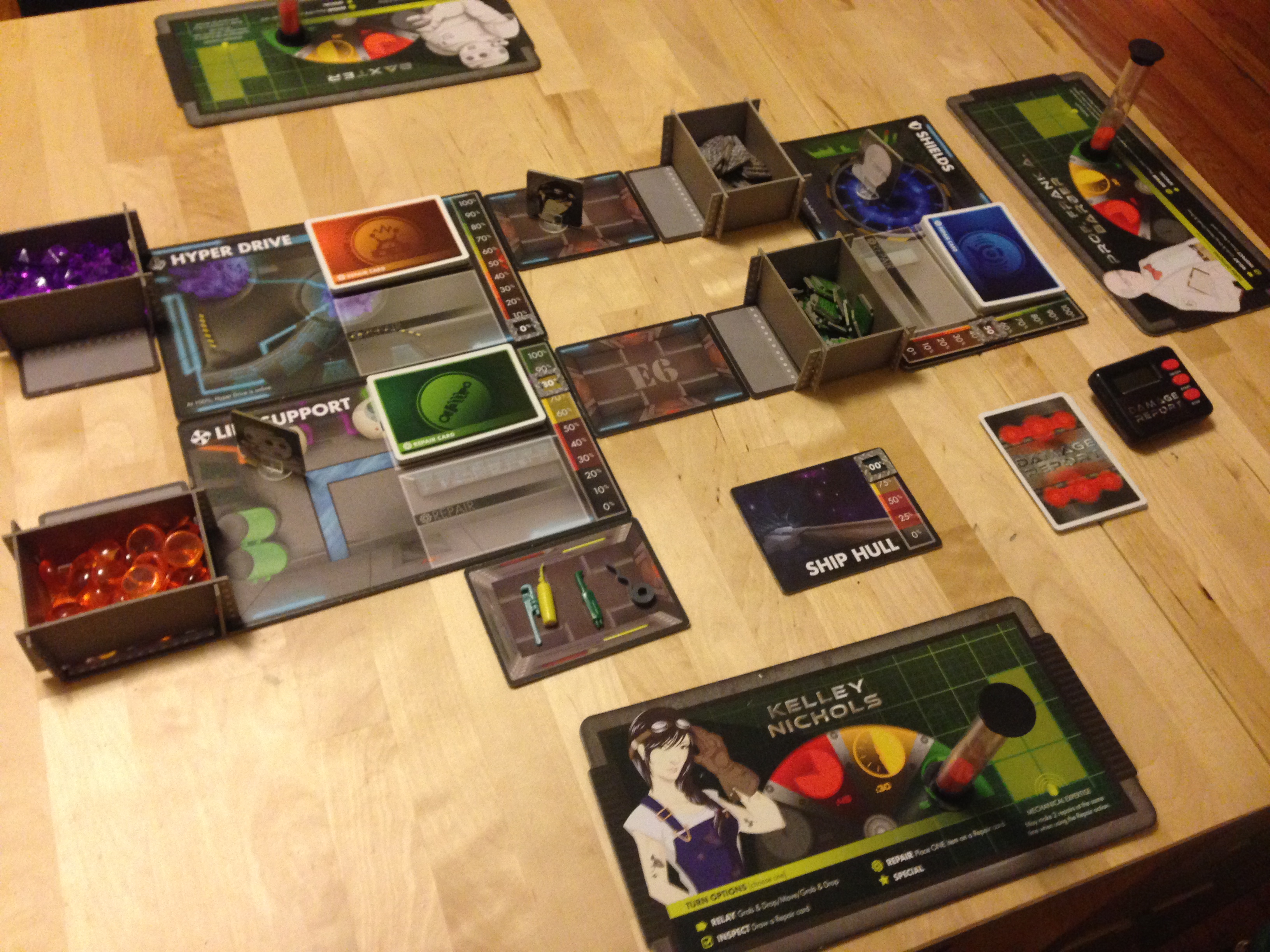 Amidst all this chaos there are also the “damage reports.” One of these cards is flipped every three minutes, and the timer never stops running. Whenever a new report is revealed, the indicated systems take damage while everybody continues to scramble all over the place doing whatever they can to keep the ship running. This means that sometimes you’ll be in relatively good shape, and other times you’ll have just spent several minutes fixing up a module to 60% only to have it immediately drop back down to 30%. Oh, and if you run out of damage report cards (of which there are a finite number for each scenario), the ship blows up and you all die. Or you could die when life support hits 0%. Or if shields drop to 0% and the hull takes too much damage. On top of that, there are also all the little human things that will inevitably happen while you’re frantically shouting plans at each other and running around the ship. Sand timers will be knocked over and players will lose several precious seconds. Completed repair cards will be difficult to remove from their module, possibly resulting in things getting knocked around a bit. People will forget to do something vital on their last turn. This is absolutely not a game for anyone looking to avoid stress. 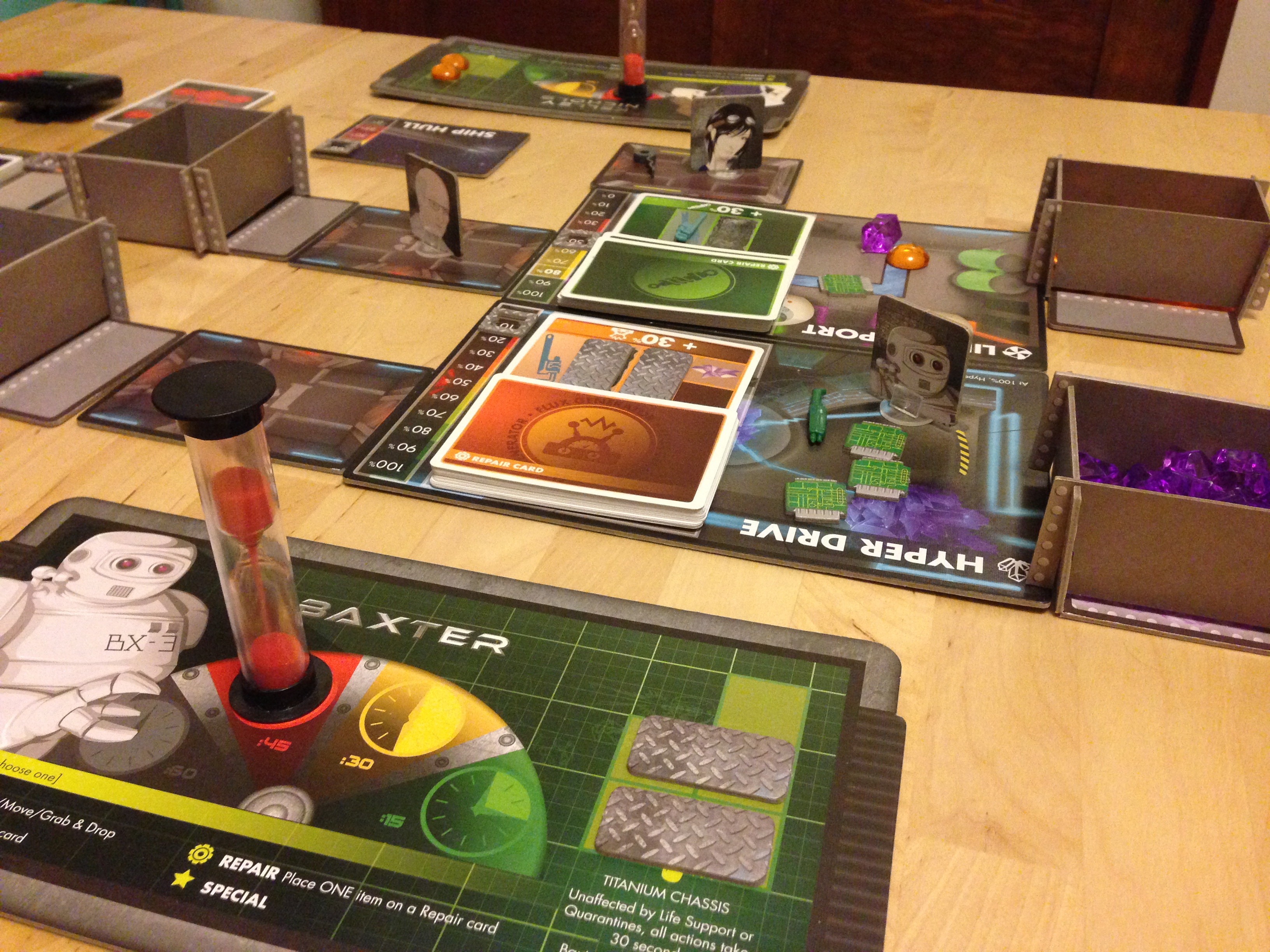 I’ll admit that I was put-off by Damage Report at first; mostly because of the poorly packaged components and the tendency they have to slide around and/or stick to surfaces at the worst possible times. However, when you put everything together, get a few friends over, and manage to barely scrape by with only a few minutes left until certain death – well it can be downright elating. This game is certainly not for everybody, but those looking for something chaotic and stressful (in a good way) should definitely check it out.