Watch Dogs finally made its debut on Nintendo’s Wii U, and I’ve been making my way through the game for the first time, live streaming my initial playtime and capturing images during my second go. Here are my initials impressions.

I’m sure most of us know what can be expected from Watch Dogs as it has been out on other consoles for a while now. It’s like a Grand Theft Auto with hackers, and it’s definitely very intriguing as the entire world can be manipulated (hacked) at will to meet the player’s needs.

It is fun being chased by police and being able to raise a road block or bridge to force the cops to halt their pursuit. It’s interesting chasing down criminals and stopping them from hurting others or bringing them to justice. It’s very intriguing being able to hack almost every person to see who they are and what they’re up to.

This is definitely an open world game that speaks to me and my interests a lot more than many others. 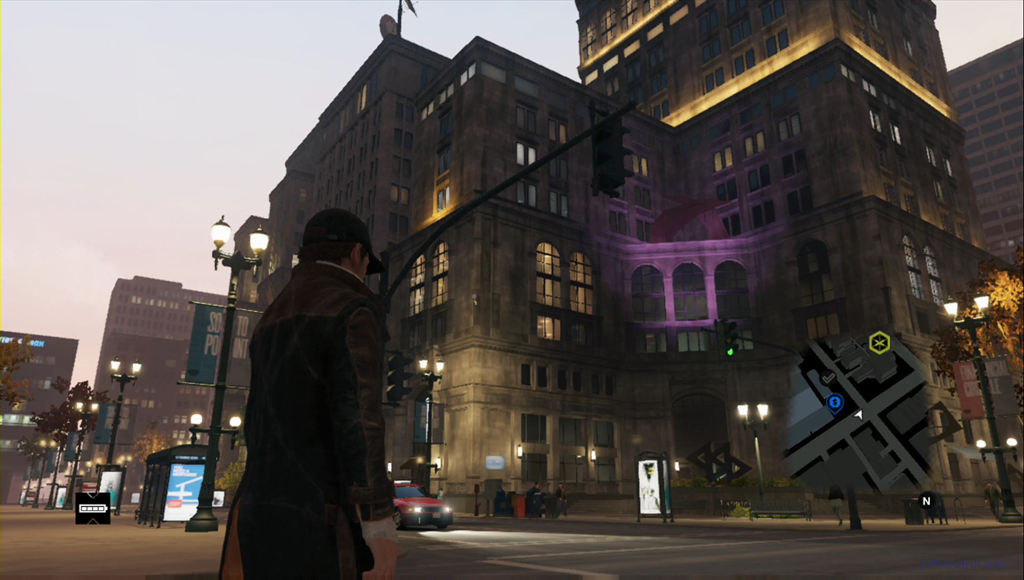 However, most of us know this already. So how is the Wii U version?

Well, it’s Watch Dogs. The graphics have been reduced, obviously. There are a few moments where frame rate is an issue but isn’t anything too horrendous. I think I noticed the worst of the frame rate when driving the boat compared to other moments such as speeding through downtown Chicago on a motorcycle. Really, it’s not that bad but it can be noticed at times.

As it plays out so far, Wii U owners are getting nearly the exact same Watch Dogs experience as everyone else. However, they can use the GamePad to select locations on a map and create a route. It’s definitely an easy way of doing things.

The creativity is once again lacking though when it comes to the GamePad. In the game players spend so much time hacking cameras just so they can visualize the area and get additional points of view or to hack into other nearby systems.

This is where Watch Dogs on the Wii U could have easy shined. Why can’t I look on my TV and see a camera to hack, and then get the camera’s perspective on my GamePad. Having this ability would allow players to feel so much more engaged in the game. If I look at Aiden on my TV looking at his phone, and then I would look down at my GamePad to see the surveillance camera’s point of view, this would be so very awesome and such a great use of the GamePad. It would have been so cool to use the GamePad to hack cameras and use them to view the terrain.

Heck, it could have gone a step further and actually allowed players to continue hacking a camera on the GamePad while navigating past guards on TV. So much creativity was lost by not doing something along these lines. This would have surely made playing Watch Dogs on the Wii U probably one of the best experiences on the console.

Besides my thoughts and creativity getting away from me while playing through the opening bit of the game, I’ve still enjoyed my experience with it so far. The controls aren’t the loosest which makes controlling the camera and vehicles somewhat difficult, but that can be fixed in the options by changing sensitivity to 100%.

For the most part I’ve found myself exploring the world more than actually engaging in missions. So I have a lot to experience still. But so far I’m definitely enjoying the entire set-up of the game in all its hacking glory.

Here’s a video from my live stream

Watch Dogs – Hacking on the Wii U