The cast of American Horror Story: Hotel may be the most suspicious-looking bunch yet, in the new poster for the season.

All of this year’s major players, including Lady Gaga, Sarah Paulson, Matt Bomer, Angela Bassett, Kathy Bates and more are pictured in the first poster for the new season that features the cast. Interestingly enough, they also all either look miserable, or like they’re up to something, two emotions that have usually led to some pretty dark situations throughout the seasons.

This year’s installment of the anthology series will follow everyone pictured, as we learn their various reasons and plans for staying at the Hotel Cortez, as well as watching them fight for their lives no doubt.

During a recent featurette for the show Sarah Paulson, who plays Hypodermic Sally, teases that she feels this season will be “a very bloody season. It’s dark it’s moody, it’s hot.”

Take a look at the poster below and see how many clues about Hotel Cortez and its residents you can find: 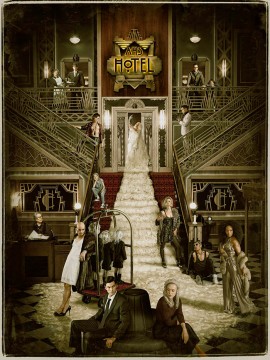 Does this poster remind anyone else of Murder House and it’s color palate? Perhaps a nod to how the tone will return to the show’s season one form.

Are you ready to check into the Hotel on October 7th?